Sisters Celebrate Past, Present on September 24 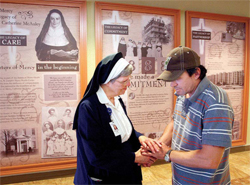 The struggles that paved the way to success are being celebrated this week by the Sisters of Mercy and their health care facilities.

September 24 is the Feast of Our Lady of Mercy, known as Mercy Day, a holiday recognized to honor the founding of the House of Mercy by Catherine McAuley on Sept. 24, 1827. But Sept. 24 is also a day that recognizes the Sisters of Mercy and those who helped them establish the roots for what is here today.

“For me, Mercy Day is really a focus on the lay people that work with us. Catherine and the other women were lay women at the time. They were coming together to provide for the poor and vulnerable,” said Sister Chabanel Finnegan, RSM, of St. Edward Mercy Medical Center in Fort Smith. “We are celebrating the commitment of all our co-workers to the Mercy ministry.”

“It’s amazing that whatever they were doing, the word caught on, the example caught on and other women began to follow, just as we did,” said Sister Liz Koehler, RSM, of St. Joseph’s Mercy Health Center in Hot Springs.

The Sisters of Mercy have a strong presence throughout Arkansas today with St. Joseph’s Mercy Health Center in Hot Springs, St. Edward Mercy Medical in Fort Smith and Mercy Medical Center in Rogers. Today, Mercy in Arkansas, through its hospitals and ambulatory clinics, touches the lives of over one million of the state’s 2.9 million residents. But that wasn’t always the case.

Bishop Andrew J. Byrne took over the new diocese in 1844 in Arkansas, a territory which included 117,048 square miles of mostly unsettled land. In 1850, Bishop Byrne traveled to Dublin, Ireland, in hopes of finding Sisters of Mercy who would make the trek. He was directed to Naas, Ireland, where he searched for Sisters who had witnessed physical deprivation and suffering and who were accustomed to prejudice and oppression; women who could see God in the poor.

“In those days, when you left you didn’t go back. Now, Sisters do go home periodically to see their families. But back then, they knew they would never see their parents or families or even Irish soil again,” said Sister Dorothy Calhoun, RSM, of St. Joseph’s Mercy Health Center in Hot Springs. “They were leaving to become missionaries to Arkansas. That was a big sacrifice.”

Of 12 Sisters who volunteered, four were selected for the journey. They sailed on the John O’Toole and a storm drove the vessel 800 miles off course. The group finally landed in New Orleans on Jan. 23, 1851, after a hard, 56-day journey.

“It was definitely a leap of faith,” said Sister Liz.

They arrived in Little Rock, AR, on Feb. 5, 1851, and they began visiting the sick and giving instruction to adults the very next day. This was the first community of Sisters of Mercy established west of the Mississippi River.

Within a few months, Bishop Byrne purchased a house for the Sisters, which was used as a school and convent. It was located across the street from where St. Andrew’s Cathedral sits in Little Rock (Louisiana St. and 7th St.) today.

In 1853, Bishop Byrne wanted to expand the ministry’s outreach to Fort Smith, AR, which at the time consisted of a few straggling houses, some wigwams and soldiers’ barracks. The Little Rock Sisters divided in half with Mother Teresa Farrell going as superior. The others going with her were Sisters de Sales O’Keefe, Mary Alphonsus Carton and Xavier Nolan. On Jan. 19, 1853, the four Sisters and Bishop Byrne boarded a steamboat for a four-day journey up the Arkansas River to Fort Smith.

They remodeled several buildings, one of which was the former headquarters of Gen. Zachary Taylor during the Mexican War, for a school and convent. Two rooms were fitted for the Sisters and schools were established for boys and girls. The convent was destroyed by fire in 1875, but rebuilt a year later. It provided much more room for the rapidly-growing community.

“The Sisters came to what was the Wild West, just across from Oklahoma Indian Territory. There was hardly anything here, but they just started right to work, speaking to people who needed help and gathering the children who needed education,” said Sister Chabanel.

Most of the Indians in the area were friendly, but wary. They would watch the Sisters through the windows of the convent. “I’m sure they were somewhat frightened, probably more from stories than anything,” said Sister Chabanel.

Eventually, they struck up a friendship. The Indians would bring their wives and children to visit the Sisters, who entertained them with music and singing and instructed them in Christian doctrine.

When the Civil War broke out in 1860, the Sisters of Mercy were caught in the middle, serving both Union and Confederate soldiers and sympathizers in Little Rock, Fort Smith and Helena. During the time of Confederate occupation, soldiers were assigned to protect their convent in Little Rock as the schools were turned into hospitals.

"They set up tents and stopped all their ministries from the time the war started until it ended. And that was their first real introduction to health care,” said Sister Chabanel. “Probably most at the time had come from Ireland. One of the things Catherine McAuley did was to teach the Sisters basic health care skills.”

Bishop Byrne died in 1862 in the midst of the war and was replaced by Bishop Edward Fitzgerald in 1867. For the first 10 years of his work in Arkansas, the Sisters of Mercy were the only religious order in the state for religious and secular instruction of children.

In 1888, Rev. Patrick McGowan wanted to bring the Sisters to Hot Springs. At the time, poor settlers brought food to the springs and boiled eggs and potatoes in its waters. There were no doctors there and bath tubs were unheard of. But many thought the springs had healing power.

In 1888, Rev. McGowan asked Dr. J.M. Keller to buy a building and surrounding property suitable for a hospital. McGowan then donated the property and its building, a five-story frame house valued at $10,000, to the Sisters of Mercy.

The hospital opened on Sept. 24, 1888, and the first patient, an engineer, was admitted by physician Dr. Charles Drake. Mother Aloysius Burke and Sister Mary Clare were kept so busy during their first six months that Sisters Lucina Primm and Rose Blackmore were sent from Little Rock to help in the new hospital.

This hospital was modern in every detail and equipped to give the mineral baths for which Hot Springs was, and continues to be, widely known.

The health care ministry was extended to Fort Smith in 1905 with the Sisters deciding to use their convent for a new infirmary. St. Edward Infirmary was founded on Nov. 27, 1905, with Sister Mary Loretta Whelan as the first administrator.

Four Sisters were sent to Pittsburgh, Pa., and Chicago to be trained as nurses. But their services were so badly needed at St. Edward that they had to return before completing their course. The student nurses and Sisters staffed the hospital each day and night, rotating on 12-hour shifts.

The first patient was admitted on Dec. 4, 1905, to the 30-bed facility. Ten more beds were added later and a patient waiting list was growing.