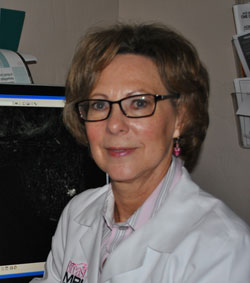 So Bond – a wife and mother of three, spirited boys – has chosen to accept the tragic news that she has breast cancer in stride. For the path she walks is not shadowed by fear and hopelessness, but rather faith and hope.

“When I was first told I had breast cancer, I was overwhelmed with disbelief and shock,” recalled Bond, 42, of Knowles. “But God has since opened doors for me, and given me peace. I truly believe this is His way of reaching other people – by using me.

“If I can help even one woman by telling my story, then I will.”

Courageously, Bond openly shared her most private story with anyone willing to listen. She agreed to field newspaper inquiries, and even did a live television interview with an Oklahoma City station on the eve of her surgery – a mastectomy operation that claimed both of her breasts. Along the way Bond energetically carried one message: “If you are 40, go have a mammogram.”

The message is one that has long been championed by Dr. Rebecca Stough, Mercy’s top radiologist and director of imaging at Mercy Women’s Center. Stough is also one of the world’s leading experts on breast MRI analysis, having established the state’s first comprehensive program with Breast MRI of Oklahoma in 2002 on the Mercy campus.

Today, she leads a staff of five physicians who are experienced breast MRI interpreters – the largest such team in the Oklahoma. Stough is motivated by many forces, some quite personal. Her mother underwent a mastectomy when she was a child, and she later lost a cousin to breast cancer.

“I hate this disease,” said Stough, her eyes framed by intensity. “I want to destroy it. I hate what it does to these women, and I rejoice every time we catch breast cancer at an early stage.”

The battle is never-ending.

Thousands of digital, ultrasound and MRI mammogram images cross her desk at Mercy each year, and yet she realizes her industry is only capturing a fraction of Oklahoma’s adult female population. Efforts to entice more women to be pro-active about breast cancer screenings appeared to gain momentum until last year.

A United States Preventive Services Task Force – an independent panel of experts in prevention and primary medicine appointed by the U.S. Department of the Health and Human Services – released a report in November, recommending regular breast cancer screenings at age 50, not 40.

The recommendation sparked a firestorm of controversy.

Organizations such as the American Cancer Society and the American College of Radiology were soon protesting the new, recommended guidelines. The debate quickly reached all corners of the country, including the fertile, red soil of Oklahoma, where Stough and her Mercy colleagues stood appalled.

Stough is now driven to spread a different message in hopes of saving lives.

“There are a lot of confusing messages out there,” said Stough, 61. “The fact is women need to start scheduling annual mammograms when they turn 40.Annual mammograms are the key. If a woman does a mammogram at age 40 and then waits until 42 to do another, she increases the odds of that cancer going undetected.

“If Angie had started doing annual mammograms at age 40, the odds are much greater that we could have detected her cancer earlier, perhaps as much as a year. When I think of it, it just breaks my heart.”

Bond sheds no tears over her fate, even as she stares at several new rounds of chemotherapy and an uncertain future. She instead embodies the same toughness of the land where she lives in the Oklahoma panhandle.

There, tucked between the Cimarron and Beaver rivers, Bond and her husband, Eric, operate a working cattle ranch in the far northern reaches of Beaver County. Their ranch sprawls across 6,000 acres of harsh terrain, often reducing modern conveniences to a luxury. In fact, certain sections of the ranch can still only be reached by horseback.

“Everyone is pretty independent out here,” Eric said. “But we still try to take care of each other. We always try to chip in where we can. Lately, it’s been overwhelming, especially being on the receiving end of things.

The outpouring of love and support for Angie and her family has been inspiring. In Knowles – a town of 32 souls – more than 300 people recently attended a benefit to help pay for some of Angie’s medical expenses.

“Out here, when someone needs help, people don’t just come from neighboring communities,” Angie said. “They come from three or four counties. That’s just how it is here.

“The support has been amazing. Women have called me – strangers – who say, ‘I know what you’re going through, and if you ever want to talk, I’m here.’ I truly feel blessed.”

Angie’s three boys remind her of that fact every day. There’s Tanner, her 13-year-old, football-playing fanatic; Trailen, her 11-year-old videogame whiz; and Trapper, her 9-year-old cowboy.

“Trapper doesn’t want anything to do with school,” Angie confessed. “All he wants to do is tag along with his father, and help out on the ranch.”

When Trapper began kindergarten, he ditched his favorite pair of boots. Puzzled, his mother asked why. He replied, “I’m not gonna wear my boots if they won’t let me wear my spurs.”

These days Trapper and his brothers are focused more on their mother, whose long, flowing, brown hair was lost to chemotherapy. Recently, the family went on an outing, and Trapper purchased a small figurine for his mother. He then surprised her with the gift – an angel.

“She’s just so young, and none of us women in the family ever had breast cancer,” said Dianna Whisenhunt, 61, and Angie’s mother. “I think about Angie, I think about Eric, and I think about those boys, and I just pray everything works out all right.

Yet in Angie onlookers see an amazing strength.

“Angie has an incredible spirit about her,” said Cheryl Gilbert, a Mercy nurse navigator who has guided Angie through the medical process since her diagnosis of cancer July 30. “Where does she get her strength? Her faith.”

“If it wasn’t for Him, I wouldn’t have been able to handle this as well as I have,” Angie said. “He’s given me peace. Not once have I thought of this as a death sentence. I know this is where I’m meant to be. I have breast cancer for a reason.

“I think He wants me to help others. And I will.”