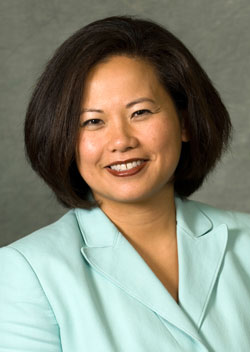 Attorney Vi Le has been on a mission her whole life. As the daughter of Vietnamese refugees who fled their homeland during the fall of Saigon in 1975, Le has chased her potential in America with purpose and passion.

Now, as Mercy’s first General Counsel and Vice President of the West Community, Le is fulfilling that potential with an ever-expanding mission. Mercy recently promoted Le to its newly created position, meaning she will oversee all of the organization’s legal services across Oklahoma.

“This is a first for Mercy, and they chose to put me at the helm,” said Le, who joined Mercy in 2007. “I’m extremely honored and humbled. It’s great to work at a place that is entrepreneurial, and yet promotes great values. We’re always very clear about what makes us Mercy.”

Prior to the promotion, Le served as Mercy’s executive director of Risk Management and Corporate Compliance. She steps into her new role with the highest vote of confidence.

“I have the deepest respect for Vi and the experience, talent and professionalism she brings to this position,” said Di Smalley, Mercy’s president in Oklahoma. “Her presence strengthens our leadership team.”

Le is shadowed by an amazing story of success. She was brought to the United States at age of one and half, and taught the importance of education by two progressive parents – Nghi and Phuong Le of Yukon. She graduated from Yukon High School in 1991, and then at the age of 20, earned an English degree from Oklahoma State University.

By age 23, Le had earned a law degree from the University of Oklahoma and her professional career soon soared. She served as a legal information coordinator with the Oklahoma Supreme Court for a time, and then worked for a Fortune 500 corporation. In 2006, The Journal Record named Le one of Oklahoma’s top 40 under-40 achievers.

Today, she is active with many organizations, including the Ruth Bader Ginsburg Inn of Court – a group that recognized her in 2003 as an Outstanding Associate. She mostly enjoys time with her husband, Brian Winkeler, and their two boys, Van (age 7) and Hugh (2). She also takes great pride in her younger brother, Huy Le – the first Asian Student Body President at Oklahoma State University and her “best friend.”

Le, meanwhile, remains humble about her achievements. She reflects any credit for her success to “two courageous parents” who made the momentous decision to flee communism in their native land.

“It’s as if I’ve been touched by saints,” said Le, now 37. “If I were still in Vietnam, there would be no guarantee what my life would be like. My parents deserve all the credit. Their sacrifice changed the entire course of my life. Today, I work in a world with no boundaries. If you can dream it, it can be done. I learned that from my parents. That’s the way they have lived their lives.”