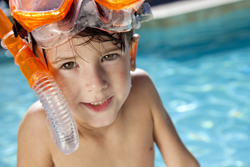 SafeKids Springfield at Mercy is

campaign teaching the importance of

The summer swimming season is just around the corner, and Safe Kids Springfield supports the U.S. Consumer Product Safety Commission’s (CPSC) release of the Pool Safely: Simple Steps Save Lives 2011 public service announcements (PSAs) highlighting various water safety steps that can be taken to save a life. In the first few months of 2011, there have been 37 drownings and 38 near-drowning incidents reported by the media across America. The PSAs are being released nationally today as part of CPSC’s ongoing campaign to urge parents and children to adopt as many safety steps as possible in and around pools and spas. The Pool Safely campaign is the federal government’s first-of-its-kind national public education effort to reduce child drownings and near-drownings in public swimming pools and spas.

Working with the American Red Cross and the Y, CPSC produced television and radio PSAs to promote the Pool Safely campaign nationwide. The PSAs introduce four families and their stories about the simple steps that save lives: door alarms, knowledge of CPR, fencing around pools and spas and safety drain covers in pools and spas. The radio PSAs promote the importance of swimming lessons as a simple step that saves lives. Available to local television and radio stations in both English and Spanish, the English-language versions feature Ming-Na, the voice of Mulan in Disney animated films and star of the NBC drama “ER”, “The Joy Luck Club” and “Stargate Universe”.

“As the summer swimming season quickly approaches, our message to parents and children is simple: stay safe in and around pools and spas by practicing as many safety steps as possible,” said Inez M. Tenenbaum, Chairman of the CPSC. “We encourage everyone to have fun in the water this summer, but we also remind parents and caregivers to stay close to children at all times, know water safety skills like CPR, and ensure anti-entrapment drain covers are installed in all pools and spas. Every drowning and near-drowning incident represents a family tragedy.”

Since January 2010, the Pool Safely campaign has responded to over 600 media-reported drowning, near-drowning and entrapment incidents. Steps such as staying close to children at all times, learning water safety skills and having the appropriate equipment, can help families have a safer experience in and around pools and spas. You can learn more about the campaign’s water safety steps go to www.poolsafely.gov.