Mercy continues to respond to COVID-19. See the latest updates and use our interactive screening tool. 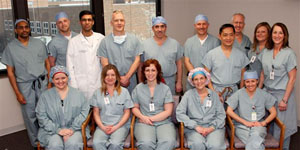 SPRINGFIELD, Mo. – While up to 1.5 million people in the U.S. suffer from aortic stenosis (AS), approximately 500,000 within this group of patients suffer from severe AS which usually occurs in patients older than 75 years of age. Mercy is among only a few in the U.S. now offering the transcatheter aortic valve replacement (TAVR), an innovative procedure to replace narrowed or diseased aortic heart valves non-surgically using a catheter.

At 86, Harold Block looks forward to getting back outside on his cattle farm in Harrison, Ark. Since November of last year, his health has been declining rapidly, but he’s ready to be outside now thanks to TAVR, which he had in March at Mercy Hospital Springfield.

Over the last several months, Block had increasingly grown weaker, unable to walk across a room without getting winded. “I couldn't walk more than ten feet without feeling like I would fall down," said Block.  He was excited to hear he would get a second chance at life, being the first patient in the region to undergo TAVR.

The Edwards SAPIEN Transcatheter Heart Valve is the first and only TAVR therapy to receive FDA approval, which occurred in November of 2011 by the U.S. Food and Drug Administration (FDA) as a therapy for patients with severe symptomatic native aortic valve stenosis who have been determined by a cardiac surgeon to be inoperable for open aortic valve replacement and in whom existing co-morbidities would not preclude the expected benefit from correction of the aortic stenosis. This procedure enables the placement of a collapsible aortic heart valve into the body through an artery in the thigh. The valve is designed to replace a patient’s diseased native aortic valve without traditional open-heart surgery and while the heart continues to beat – preventing the need for cardiopulmonary bypass; therefore, recovery time is much faster.

“TAVR allows us to treat patients who would otherwise not be treatable with standard open-heart surgery to have their aortic valve replaced,” said Dr. David Cochran, Mercy cardiologist. “These are patients who are inoperable for a variety of reasons, such as older age, prior open-heart surgery, or coexistent medical conditions, which make them too high of a risk for conventional valve replacement surgery. Up to now, their only other option was medical therapy which can cause debilitating symptoms and has a poor short-term prognosis in terms of survival.”

Soon after his surgery, Block was up and walking without any problem. "As soon as I came to after the surgery, I could tell that I felt a lot better," said Block who was able to go home just two days after having the TAVR procedure. "I had no other option at that point, and I'm so glad I did it. I feel great now."

“It’s an exciting new option to be able to offer because it has the potential to fix the underlying problem and allow the patient to feel better quickly. It offers them hope and, in a lot of cases, the ability to return to activities that they have not been able to do for months, or often even a year or more,” said Dr. Cochran.

A multi-disciplinary, Heart Team approach is essential to ensuring optimal patient outcomes in TAVR. The partnership between the cardiothoracic surgeon and interventional cardiologist establishes the core of the TAVR Heart Team.

“It’s the culmination of almost two years of work with Mercy’s cardiologists and cardiovascular surgeons and the vendor, Edwards Lifesciences, to design and implement what is known as the TAVR Program,” said Andrew Reid, vice president of cardiology at Mercy Hospital Springfield. “This incredible new technology is sure to benefit many patients in the communities that we serve.”

Studies show that without an aortic valve replacement, 50 percent of patients with severe AS will not survive more than an average of two years after the onset of symptoms. Prior to the advent of TAVR, there was no definitive treatment option available for inoperable patients.