Mercy continues to respond to COVID-19. See the latest updates and use our interactive screening tool.

As people remember the tornado that wreaked havoc this day, the community plans for the future 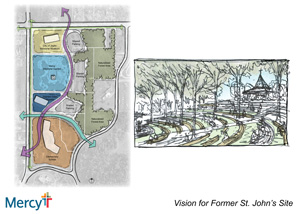 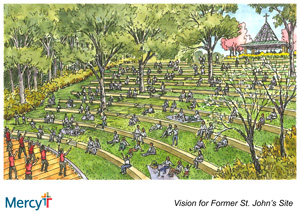 Joplin, MO – The shattered towers of St. John’s Regional Medical Center that became an iconic image of last May’s tornado are giving way to demolition, clearing land that will become part of Joplin’s rebirth into a brighter future. Mercy announced today conceptual plans for the hospital’s nearly 50-acre campus, property that will be given as a gift to the people of Joplin. St. John’s – recently renamed Mercy Hospital Joplin – is part of Mercy.

The former hospital site is expected to become a multi-purpose center of reverence, learning and art. Residents and Mercy co-workers are discussing plans for a cultural complex that Joplin can treasure for decades.

“This is hallowed land that no longer belongs to Mercy but to the story of Joplin, of residents enduring a massive disaster by coming together to rebuild and move forward, “ said Gary Pulsipher, president of Mercy Hospital Joplin. “We hope new uses of the campus can weave together as sort of a healing quilt for the city.”

The property is available because of Mercy’s decision to rebuild a few miles away at I-44 and Main Street. The new Mercy Hospital Joplin will be a state-of-the-art facility and the cornerstone of nearly $1 billion that Mercy has committed to rebuilding its medical complex, including interim structures and maintaining the payroll for all its co-workers.

Demolition began at the south end of the property to make room for the first new use, as host to Irving Elementary School, replacing two of the six public schools destroyed by the storm. Joplin schools officials have welcomed Mercy’s land gift and are breaking ground today for the new elementary school.

About a dozen acres of the St. John’s campus will go to the classrooms, playgrounds and green areas. That leaves more than 30 acres available for other uses. Conversations with co-workers and residents have yielded a number of ideas that touch on memories, the arts, history and community.

Concepts include a theater, museum, memorial garden and a forested area combined with parking. All of them might share facilities for special events, working together as a family of attractions and assets. “We are thrilled at the chance to provide the land that one day may include a meaningful center for the benefit of the entire region,” said Sister Cabrini Koelsch, director of mission services for the Joplin hospital.

The property gives rise to strong emotions, including memories of St. John’s, a fixture on Joplin’s horizon for four decades, as well as mourning for lives lost in the storm. Mercy co-workers and community members have talked of a memorial garden that would fill the footprint of the hospital itself, perhaps with contemplative spaces and familiar artifacts from the ruined building.

Bittersweet, too, are memories of the destroyed Stained Glass Theatre, home of a Christian-based amateur company that leased an old church from Mercy for its productions. Restoring the theater to the grounds is a priority for many involved in the planning process. Other early concepts include a museum that would capture the power and terror of the storm, and put it into the broader story of Joplin and the grit of its people.

Resident and co-worker committees working with Mercy leaders will continue to give shape to the plans. They also will coordinate with Joplin city planners to mesh the memorials with others planned across the area. Final plans, too, will depend on raising funds for each project. Money might come from governments, foundations or generous patrons, and perhaps from a broad spectrum of residents and Mercy co-workers. A walk, for example, that might meander across the property could be assembled from bricks with memorials inscribed for a donation.

The commemorations will start when the last of the buildings are cleared, which might be as early as September 2012. Mercy co-workers don’t want to leave a barren lot while plans proceeds on how to fill it. As the last demolition truck leaves, co-workers are thinking of returning to the campus for a memorial ceremony that would include sprinkling the grounds with wildflower seeds.