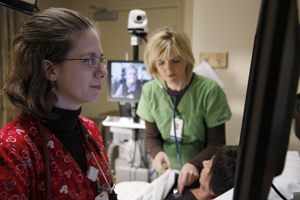 SPRINGFIELD, Mo.--Imagine your 6-year-old suddenly started having convulsions. Now imagine you have to rush him to a hospital where you barely speak the language. You can’t understand the medical terms the doctors and nurses are using, and you’re scared you aren’t telling them everything they need to know. That’s exactly what happened to Margarita Flores and her young son, Willie.

Luckily, there was help waiting at Mercy Hospital Berryville. Dr. Andrew David immediately called an interpreter through a new Mercy service called Video Remote Interpreting (VRI). Within a minute, interpreters who are trained in medical terminology are on a video screen, ready to translate for patients who don’t speak English well. “I felt surprised and thought it was really great to have it, because it made communicating so much easier,” said Flores. “It would’ve taken longer and I wouldn’t have known the right words to say. It also would’ve been hard for people to understand me.”

With Willie’s acute symptoms, Dr. David says VRI really calmed everyone’s nerves. “I think the word fabulous or maybe awesome would be appropriate. Clear communication made all the difference in the world. Before, we would have had an interpreter on the phone, but the video makes it so much easier for everyone to understand each other.”

“It’s part of our mission of hospitality,” explained Steve Fowler, director of Mission Services. “For the Sisters of Mercy, one of the chief concerns is welcoming the stranger, and giving compassionate care.  Technology can help us give the same high quality of care to every member of our community.”

The very first day Mercy Hospital Springfield had the new service, it was needed. A stroke patient whose family primarily spoke Arabic was able to use a video interpreter. Stella Falconer, a Mercy quality nurse specialist, was in the room and witnessed their gratitude. “That brief experience has made the entire project worthwhile,” she said. “There have been so many times that I’ve felt my ability to communicate has been lacking. This is a game changer. It’s an exciting advancement in providing quality care to all of our patients.”

The service comes at a cost of about $7,200 per month for Mercy, but leaders believe it’s a necessary expense. “We’ve seen an increase in diversity in the Ozarks,” said Fowler. “We realized we had to bridge the communication gap quickly. Soon we hope to have these devices available in more of our clinics, especially in some of our more remote locations.”

As for 6-year-old Willie, he’s doing just fine, and taking medication to prevent another seizure. The success Dr. David had with treating him has changed how he cares for others. “From now on, the video interpreter goes in the room with me. If English is not the patient’s primary language, even if they speak well, I’m going to use it. Medical terms are tough to translate, and this system gives everyone in the room an immediate understanding.”