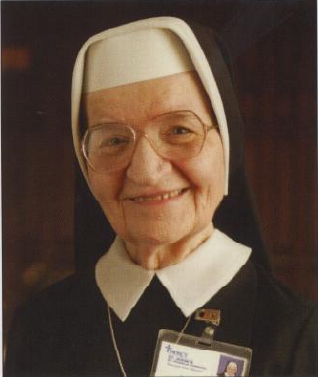 Mercy St. Francis Hospital has not felt the same to co-workers since their beloved Sister Mary Cornelia Blasko was transported by helicopter to a nursing home operated by the Daughters of St. Francis in Illinois on Nov. 14. At age 87, Sister Cornelia was coping with several degenerative medical issues including a broken back when she was ushered out of the Mountain View, Mo. hospital. Mercy co-workers and community members lined the hallways to wave goodbye and wish Sister Cornelia well.

Just a year after the hospital in Mountain View first opened in 1951, the doctor who practiced medicine and had ownership over the hospital passed away. With his death and the later closing of the hospital, weeds began to take over the hill and discouragement swept over the town. In 1956, the Catholic Archdiocese of St. Louis came forward to purchase the hospital, and a local priest scoured the country for communities of Sisters that could help.

Six Sisters of St. Francis traveled from Lacon, Ill. to Mountain View by bus with all their possessions in little cases. The bus dropped them off in the middle of town, and the six Sisters trekked up the hill through the weeds to discover the enormous responsibility they had just accepted. Sister Cornelia was one of those women, and she recalled sleeping on the floor for the first few months and living mostly off apples from the tree outside the hospital.

Since 1998 when the Sisters of Mercy partnered with St. Francis Hospital, Sister Cornelia has worked as the mission integration coordinator, serving God and the residents of south central Missouri.

“Sister Cornelia helped connect us to our mission, and she kept us grounded. She visited patients every day, even on weekends,” said Jonathan Wade, president of Mercy St. Francis Hospital. “She did a lot to keep us focused and remind us why we were all here.”

Co-workers, physicians, and community members already miss her warm presence and kind heart. She served as a pioneer for Mountain View, and the area will not be the same without her in it.

Doctors do not foresee Sister Cornelia fully recovering or continuing to work in Mountain View, but Wade said Sister Cornelia has been known to defy odds.  “With her, you just never know. She may be back. I’ve seen her go to the chapel and change the weather, so I don’t doubt that she could be healed in some way.”

Sister Cornelia is now in the same community of Sisters in Lacon where she first received the hopeful letter asking for her aid to reopen the small hospital on the hill. Mountain View got so much more than that.

“She has always been our identity,” said Wade. “She has a special commitment to St. Francis, and she can’t be replaced. Another person like her does not exist.”

Letters or cards are welcomed by Sister Cornelia and can be sent to:

More photos can be found and downloaded at this link.