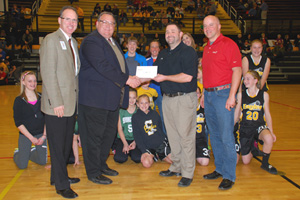 to replace stolen items. Pictured from left are

Behind them are several members of the

The presentation was held February 19 at Sullivan High School.

Washington, Mo. – After being robbed of their softball gear, members of the Sullivan Girls Softball Association weren’t sure if they would start the season as usual.

Thanks to Mercy and other donors, the league will start the season as planned.

“Mercy is all about connecting to the communities we serve. When we learned that the Sullivan Girls Softball Association had been victimized by burglars, we felt terrible for them and thought it was important to act quickly to get the girls back on the field,” said Dr. David Chalk, president of Mercy Clinic.

Mercy presented the league with a $4,000 donation to help replace the equipment and keep the girls active of the softball field.

It was the largest of the many donations the group has received since the burglary was discovered February 9.

The league supports about 300 school-aged girls in the area.

“Athletic programs like this one are at the core of helping young people learn about healthy lifestyles and physical fitness,” said Terri McLain, president of Mercy Hospital Washington. “We wanted to show our support because programs like these promote healthy habits for life.”

Matt Dace is the board president of the Sullivan Girls Softball Association. “We’re very grateful to the community for their support, and very grateful to Mercy,” he said. “With all the support we’ve received since the burglary, the girls will start the season as planned with new equipment. We’re all very excited about that and looking forward to a great season.”