Protect Your Kids From Sports-Related Injuries 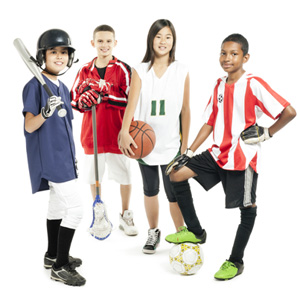 Every 25 seconds, or 1.35 million times a year, a young athlete suffers a sports injury severe enough to go to the emergency room, according to a new research report released today by Safe Kids Worldwide. Affiliate program Safe Kids Springfield is led by the trauma services department at Mercy Hospital Springfield.

The report, “Game Changers,” made possible with support from Johnson & Johnson, takes an in-depth look at data from the U.S. Consumer Product Safety Commission's National Electronic Injury Surveillance System (NEISS) to explore what type of injuries are sidelining young athletes.

According to the report that studied the 14 most popular sports, concussions account for 163,000 of those ER visits, or 12 percent. That's a concussion-related ER visit every three minutes. Surprisingly, it is not just high school athletes suffering concussions; athletes ages 12 to 15 make up almost half (47%) of the sports-related concussions seen in the ER, a statistic made even more disturbing by the knowledge that younger children with concussions take a longer time to recover than older children.

The report also revealed that knee injuries account for one in ten sports-related injuries. Knee injuries, specifically tears to the anterior cruciate ligament (ACL), are disproportionately affecting young female athletes, who are up to eight times more likely to have an ACL injury than male athletes.

"We uncovered some disturbing data about how often kids in our community are being injured playing sports," said Daphne Greenlee, Safe Kids Springfield and trauma outreach coordinator for Mercy Hospital Springfield.   “But we also found inspiring stories from people and programs that are making a marked difference.”

The report also includes profiles of some communities, sports leagues, and individual athletes who are taking a proactive stance in order to turn these statistics around.

Safe Kids Springfield and our partners are calling on community members, coaches, parents, sports leagues and athletes to implement four overarching strategies that are making a difference:

“Education and prevention are key to most sports injuries, including concussions,” said Dr. Brian Mahaffey, Mercy Clinic Sports Medicine specialist, head team physician for Missouri State University and team physician for the St. Louis Cardinals. “Our goal is a team approach with athletes, parents, coaches, athletic trainers, and other medical providers, which has been shown to be effective in keeping children safe and healthy during sports.”