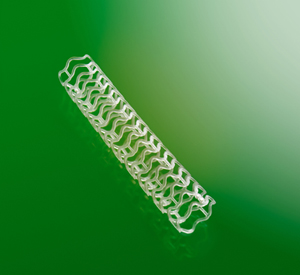 The Absorb mesh tube is designed to dissolve into the body

The Centers for Disease Control and Prevention estimates that one in every four deaths in the United States can be blamed on heart disease. Prevention and the development of new treatments are key to our fight against failing hearts.

It’s why Mercy Hospital Springfield is evaluating an innovative device to fight coronary artery disease, which is characterized by blockages of fat and cholesterol in the vessels that supply blood to the heart. Doctors have been treating those blockages in the heart for decades with things like balloon angioplasty and metallic and drug eluting stents, which push the blockages out of the way and restore blood flow.

The latest innovation is a temporary device that eventually dissolves into the body. Absorb is an investigational device that is referred to as a bioresorbable vascular scaffold (BVS). It’s a small mesh tube made from polylactide, a material that’s commonly used things like dissolvable stitches.

“It’s called a scaffold because it’s truly temporary,” explained Dr. Robert Merritt, Mercy cardiologist and the site’s principal investigator in the trial. “It basically evaporates from the body. Since there isn’t a metal stent left behind, patients who need treatment in the future can get another stent. Right now, a patient with several metal stents in one area of an artery may have no choice but open heart surgery.”

This is a randomized study, so patients don’t know if they are receiving a metal stent or the new Absorb scaffold. The trial will enroll approximately 2,250 patients, and researchers will determine the safety and effectiveness of the Absorb BVS as well as how much natural motion may return to the vessel after the stent dissolves. Absorb leaves behind two pairs of tiny metallic markers, which will help doctors see where it was placed.

“If the Absorb scaffold works, it could represent a significant leap in the treatment of coronary artery disease,” said Dr. Merritt.

Absorb was developed by Abbott, which is the first company in the world to begin testing a bioresorbable vascular scaffold in patients in the United States. If you are interested in participating in the study, please call Mercy Medical Research Institute at (417) 841-0250.