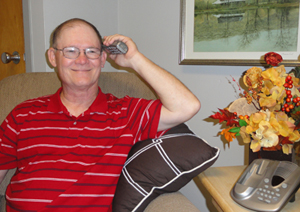 Michael Rissler holds the phone to his implant instead of his ear.

When Michael Rissler talks on the telephone he doesn’t hold the receiver to his ear. He holds it to his head so his cochlear implant can do the hearing for him.

Michael received the implant in May at Mercy Hospital Berryville after struggling for decades with deteriorating hearing. He’d gone almost a year without any hearing at all. “I couldn’t even hear myself,” he explained. “People had to write things on paper for me.”

Hearing aids could no longer help. His audiologist, Dr. Tony Asay with Sound Advice Hearing Doctors in Harrison, Ark., told him there was one possible solution. “I conducted audiologic testing to make sure he was a candidate for a cochlear implant, and he was,” said Dr. Asay.

Cochlear implants are surgically-implanted devices that stimulate the hearing nerve. They aren’t like hearing aids, which simply make sounds louder.

Without his hearing, Michael was becoming increasingly isolated. “He couldn’t conduct any business by himself, like shopping,” said his wife, Anita. “He couldn’t go to social events.” Most importantly, he could no longer hear his daughter’s voice when she called home from out of state. “I think that’s what convinced him to have the surgery,” Anita said.

It also helped that Michael didn’t have to travel far for the procedure, which is often only available at larger hospitals. Dr. Scott Estrem, who’s been performing cochlear implant surgery since 1986, had just begun practicing down the road at Mercy Hospital Berryville. “Michael was excited about the possibilities of the implantation, but I could tell he wasn’t quite convinced it would work for him,” explained Dr. Estrem.

Still, he went through with it. Doctors let him heal for four weeks after the surgery, then everyone gathered in Dr. Asay’s office to activate the device. “I heard a mechanical beeping, then heard people in the room,” said Michael. “At first it sounded like they were on helium. I was in shock. I didn’t think it would work.”

It certainly did work, with Michael’s hearing improving every day. While talking on the telephone has still been difficult, next week he’ll be fitted with a special connection that will improve the experience. “It’s extremely nice to hear my child’s voice on the phone,” he said.

While thousands of patients across the country get cochlear implants each year, most have to travel to find doctors with experience. That isn’t the case in northwest Arkansas anymore. “Since we’ve launched this program, we’ve already determined that six other patients are candidates for cochlear implants,” explained Dr. Estrem. “It’s an example of how important specialists are in a rural hospital as they bring newer advances and technology to patients who might not have been aware of all their options.”

Michael jokes that he asked Dr. Estrem for a “wife filter,” but he and Anita agree the surgery has changed their lives for the better. “I can go to the store and the bank, which I couldn’t do before,” Michael said. “I’m also a Mercy auxiliary member, and my volunteer work at the thrift store is much easier now. I’d tell anyone who’s a candidate to do this. There was very minimal pain with the surgery and it’s amazing to be able to hear the sounds of nature again, like wind, rain and birds.”