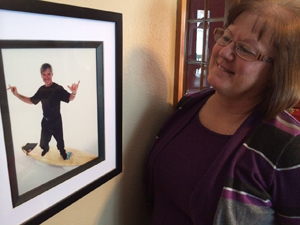 Nancy reflects on her travels with her late husband

Nancy Littrell and her husband David traveled the world, seeing sights some people only dream about. They have flown over oceans, embarked on 21 cruises, and hiked some of the highest mountains – but nothing could have prepared Nancy for the journey she was forced to take in the fall of 2011.

“David and I left our home to go on a camping trip with our family,” recalled Nancy. “We were almost there, but a pickup truck met us at a bridge. Its trailer full of canoes came unhinged and slammed through our windshield.” David was killed instantly, abruptly ending their 39-year marriage. Nancy was knocked out by a traumatic brain injury, skull fracture and broken neck. She was airlifted from the site near Tecumseh, Mo., to West Plains, where she was stabilized and later transferred to the intensive care unit at Mercy Springfield.

“I don’t remember anything about the accident,” said Nancy. “I have a little bit of memory of when I woke up enough to realize something was very wrong. It was obvious to me I had gotten hurt and I was in the hospital. But I knew something was really wrong because David wasn’t beside me.”

It took Nancy nine days to realize her travel companion, and love of her life, was gone – and so was her speech. She also lost the ability to swallow or even comprehend basic information. “My first solid memory is being so incredibly thirsty but not able to form the words to ask for a drink. I remember lying there, trying so hard to ask my daughters, ‘where is your dad?’ but it came out with a long, drawn out ‘daaaaad.’ They knew what I was trying to say.”

Nancy spent a month in the rehabilitation unit, receiving care from physicians, trauma doctors, surgeons and psychologists – all fully integrated within the Level I Trauma Center at Mercy Springfield. “Early on, her brain just wasn’t really hers,” recalls Dr. Hollis Bell. “She couldn’t eat anything by mouth; we had to give her nutrition through a nasal tube.” Nancy’s vision was also severely damaged, and she’d lost hearing in one ear.

On top of mourning her husband’s death, Nancy, who’d worked as a professional bookkeeper for more than 20 years, had to re-learn basic skills like counting and spelling. “Not being able to do math was especially difficult,” added Nancy. “I knew I should know it! When I first started counting, I’d be so excited just to make it to 10. And every morning I’d wake up reciting the ABCs in my head, but I couldn’t form them into words.” Her therapists began to see quick results. “You hear of speech therapy and you think it’s just the words, but that’s not how it is at all,” added Nancy. “They really helped me by playing games like you do in Kindergarten, grouping colors together or following the maze.”

Meanwhile, details slowly emerged about that tragic crash. “Under David’s seat, they found an itinerary for a trip to Spain. I think he was going to surprise me. Emergency crews say they knew our names so quickly because of those documents.” Needless to say, Nancy had even more inspiration to pull through. “It just clicked. I realized it was going to be up to me to recover. I told myself, ‘you’re going to have to work and work hard.’ I was pushing myself to the limit.”

“Oh, she was determined to take that cruise,” laughed Dr. Bell. “She and her husband loved to take cruises, and she prides herself on finding cruises for low prices. It became an ongoing joke when I’d see her. I’d ask, ‘where are you cruising next, Nancy?’”

But before Nancy could even consider coasting into a transatlantic cruise, she had more work ahead of her. “They tried to teach me how to get around in a wheel chair. Everything was backward; I just couldn’t do it. Then they tried a cane. I definitely flunked cane school. I just wanted to walk!”

Mercy staff, already in awe over Nancy’s resilience, hailed her as their hero when her selflessness came to light. “By the time she was ready to leave, she became more concerned about her daughters, who would be watching her grandchildren, and who’d be watching her ailing mother,” explained Dr. Bell. “It wasn’t about her recovery anymore.”

“The Mercy doctors kept saying, ‘you are one tough lady!’ But I’d say, ‘I’m a tough broad, but I have a tougher God.’” Walker in tow and neck brace in place, Nancy made the voyage home, preparing for 24-hour supervision by her daughter. Two months later, the two were en route to Spain. “My heart was heavy with sorrow, and I couldn’t walk without help from my daughter, but we did it. I couldn’t see as well as I can now, but I’m so very glad we went. I thank God for getting me there.”

“The fact that she’d been well enough to go home within a month speaks a lot about her recovery,” said Dr. Bell. “Many would give up and stay home, addicted to medications or television, but not Nancy.” Nancy endured several months of intense outpatient therapy in Springfield; sixteen months after the crash, she was cleared to drive.

“I never thought I’d be so excited about running errands in my life,” Nancy said with a smile before shifting gears to the future. “During the first year of my recovery, I kept saying, ‘I want to make a difference along the way.’ That was my goal: to help others with their journeys.” Nancy, who just months earlier had difficulty pronouncing multi-syllable words, began booking speeches for Christian women’s groups. “I’m heading to Eureka Springs this spring to talk to pastors’ wives. I don’t want to stand up there and yack all about myself, but some people do find my story to be inspiring. I like to thread my story in with other things – like how you can heal with the help of God.”

Nancy marked her latest milestone in January 2014, celebrating her 60th birthday alongside family and friends at a masquerade-themed bash. “Not only was she laughing and dancing, she was making all of us dance to Donna Summer hits from the ‘70s and ‘80s,” laughed family friend Kate Klise. “I told her after the party the only song we didn’t dance to was the Nancy Littrell theme song: Gloria Gaynor’s “I Will Survive.”

Having mastered the art of survival, this well-traveled woman of faith promises not to stop giving back to the world that helped her heal. “I feel even more that we need to give to each other. And what we give will come back to us abundantly.”

In February 2014, Nancy met with KOLR10 News and was featured in the station's "Hometown Heroes" series. Click here to watch the report.