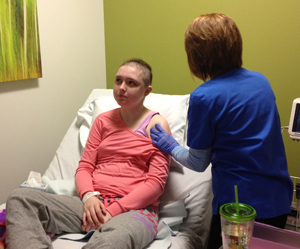 She’s only 15 years old, but Sophia Greenwalt has raised and given away thousands of dollars in just the past few years. Through a school project, Sophia has supported a teacher with cancer, the Honor Flight program for World War II veterans and the Make-a-Wish Foundation. She was even named the Youth Volunteer of the Year for Missouri, which earned her $1,000 in prize money and a trip to Washington, D.C. - but a surprise diagnosis put an end to those travel plans; she and her family found themselves in need of others’ generosity.

“We thought she had bronchitis,” said Sophia’s mother, Nettie Greenwalt. “Then we found out it was leukemia.”

The family’s world started to spin out of control. Because of their insurance coverage, they were referred to a doctor four hours away in Kansas City. “We literally lived out of suitcases for eight months,” said Nettie. “I was with Sophia and my husband was with our son. It was such a toll – we are such a close family.”

The battle against cancer was proving tough. The chemotherapy caused a stroke, but Sophia recovered. Then excess fluid made it necessary for her to have open heart surgery. Nettie and Sophia were handling it all, but it was tough without the rest of the family nearby. Finally, a nurse in Kansas City told Nettie she should at least see if they could get care in Springfield at Mercy Kids’ St. Jude-affiliate clinic.

“I knew our insurance didn’t cover Mercy, but I called anyway,” said Nettie. She learned they could transfer Sophia’s care to Springfield without paying more. “I couldn’t believe it. It was such a relief and such a blessing.” Their drive time dropped from four hours to 45 minutes – just in time for Thanksgiving and Christmas.

“It’s so nice to be close to home,” said Sophia. “Whenever I am admitted I’ll get to see my family now and I like the clinic a lot. I especially like the teen room for kids my age. It’s just a lot less overwhelming.”

Despite difficulties with chemotherapy that have led to trouble walking, headaches and vomiting, Sophia’s specialist says she is always smiling and is easy going. “She’s that type of teenager that any parent would wish to raise,” said Dr. Zaher Naji, Mercy Kids hematologist – oncologist. “She is sweet as can be and doesn’t even argue with her mom!”

In fact, her mom beams with pride to be able to say, “The crazy thing is, she’s still raising money for others.” It’s true. Sophia took half of her $1,000 prize winnings and donated it to her hometown’s Thanksgiving dinner, something she has supported for the past three years. “I just felt like I needed to help around Thanksgiving and I like helping out every year,” she explained.

Sophia’s battle against cancer isn’t finished yet, but she’s already making plans for the future. First on the list: she’ll take that trip to Washington, D.C. After that, she’ll turn her focus back to helping others, with the ultimate goal of becoming a pediatric oncologist-hematologist so she can help kids who are just like her.