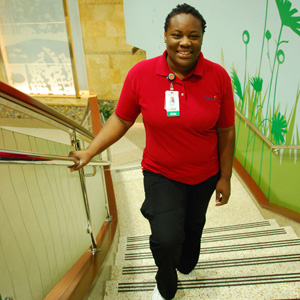 Hospice aide Laquette Collins was featured in the

one of the region's Healthiest Employers.

The St. Louis Business Journal named Mercy as one of the "Healthiest Employers" in the region.

Listed among companies with more than 5,000 employees, the award is based on ministry-wide initiatives that reflect Mercy’s commitment to healthy co-workers.

The recognition is the result of a survey conducted by Healthiest Employers LLC, an independent firm based in Indianapolis. The survey results identified 25 companies – five in each category based on size – and selected the 2014 Healthiest Employers, according to editor Vince Brennan.

“Mercy's Healthification movement is an evidence-based, comprehensive wellness program offering services, tools, resources and rewards to Mercy co-workers,” the story explained. “Co-worker utilization of the new Healthification portal has seen more than 11,000 individuals registered in the first two quarters, and more than 184,000 log-in times as participants continue to come back and use the tools available to them.”

Rather than focus on the company, each story profiled a co-worker who found benefit in his or her workplace wellness opportunities.

“We wanted to tell the stories through the employees and how their lives were – and are – impacted by the variety of health care and wellness initiatives at each company,” Brennan wrote in an introduction to the special section.

Mercy hospice aide Laquette Collins was featured in the story about Mercy. She discussed programs available, such as the Walk to Dublin event that had participants walking more than 549 million steps equaling 260,000 miles.

Laquette also offered advice on the best way to start your day: “With a prayer and a smoothie. Once I arrive at the office, I use the stairs instead of the elevator.”

LeAnn Harris, Mercy's director of operations, health and wellness, was featured in the news magazine’s cover story. She explained the benefit to Mercy and the $2 million in incentives offered to co-workers for participating in Healthification programs.

“It’s really a small investment when you look at the cost of someone becoming a diabetic, employees being out, those kinds of things,” Harris said. “We think making these small investments can have a big impact long-term. We all know healthy behaviors provide a better workforce, which means better patient care.”