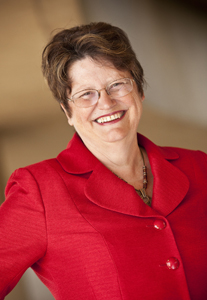 Smalley joins 129 other female health care leaders from across the country and is the only Oklahoma-based executive named to the 2014 list.

In 2007, Smalley joined Mercy as president of Mercy’s services and hospitals in Oklahoma. Prior to joining Mercy, she served in various leadership roles with Omaha, Nebraska-based Alegent Health. While at Alegent, Smalley co-founded Avantas, a nationally recognized company for proven best-practice work strategies for the health care industry.

Smalley holds a bachelor’s degree in biology from Midland Lutheran College in Fremont, Nebraska, and a master’s degree in public health from the University of Minnesota in Minneapolis. She is also a graduate of the Nebraska Methodist School of Nursing in Omaha. She completed her fellowship from the American College of Healthcare Executives (ACHE) and is currently the immediate past chair of ACHE, an organization of more than 40,000 health care leaders from across the world who are dedicated to improving health care delivery.

“I began my career as a bedside nurse in Nebraska,” said Smalley. “This experience has allowed me to continue to make a difference in the lives of patients. I’m honored to be named among a list of female professionals who are impacting health care in this country.”