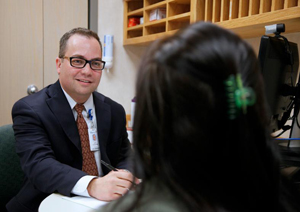 If you’ve been following the news recently, you’ve likely heard reports of Middle East Respiratory Syndrome (MERS) globally, then nationally and now locally. MERS is a viral respiratory illness that was first reported in Saudi Arabia in 2012. Thirty percent of those infected died and many were health care workers. Within the last few months, hundreds of cases have been confirmed, including three in the U.S. in just the last few weeks. The most recent was confirmed in Illinois.

“Many people heard about SARS, which infected about 8,000 people worldwide. That coronavirus had a significant fatality rate (about 10 percent) and it’s now currently off the map and there have been no new cases in many years. This is a new virus, and appears to be much more deadly. The fatality rate is 30 percent. It’s a viral illness for which there is no vaccine. It’s currently infected about 600 people worldwide in more than a dozen countries, but it’s getting closer to home.”

What should we know in the Midwest?

“First, there is no need to panic. The vast majority of individuals have nothing to worry about, but it’s good to know about it. Just like with all of our travelers, no matter where they are going, we urge situational awareness. They need to understand what their risks are, based on the itinerary and activities. It’s no different in that sense from giving someone good advice about mosquito bites and the dengue virus, or dengue fever. For MERS, we advise that if anyone is  traveling to the Arabian Peninsula, their risk is elevated. If they’re a health care worker, the risk is much more elevated. So far, the folks who’ve had manifestation of the disease (cough, fever, chills) were health care workers.”

How can we protect ourselves?

“The understanding we have so far is that casual contact doesn’t put people at risk. Close contact, in particular health care workers who may be in contact with aerosolized water droplets, like when someone coughs, are at risk. In that sense, if someone is not in close contact with someone who has the fever, or who has coughing, they’re probably going to be low risk. If they are going to be around those people, and they are health care workers, they need to use a mask and gloves, not touch the patient’s face, and so on, when they’re in contact with patients who may be infected. People should also avoid touching their own face, mouth or nose if they’re potentially around someone who is infected.”

Who is at risk?

“We look at the generations of contact, when someone has first contact with someone with a fever and a manifestation of the illness, that person is certainly at risk to get infected. If they’re infected and not manifesting symptoms of disease, they’re less likely to transmit it to the next person. Does that second person transmit? It doesn’t seem so, and that’s a good thing. Bottom line: the only way you’d know to get tested is whether you’ve come in contact with someone who has the symptoms.”

Where do you see this going?

“That’s a good question. One of the things that has gotten our attention is that it seems to be increasing in recent months. There’s almost 600 people infected that we know of, but half of them were infected in the last few months. That tells us that it’s accelerating. That’s an important distinction about this illness. The problem is that we don’t have a lot of data yet. It lives on solid surfaces for up to 48 hours, and we have some basic knowledge, but we don’t have solid data on just how big of a problem this is going to be. It’s a big question mark for the future. So perhaps with proper precautions it will not live on for too long."

Dr. Brown, who is board certified in family medicine, has practiced travel medicine with Mercy for nearly 13 years. He holds a certificate in travel health (CTH) with a master’s in health administration. He is currently practicing at Mercy Clinic Travel Medicine – Whiteside at 2215 S. Fremont, Suite 2200.