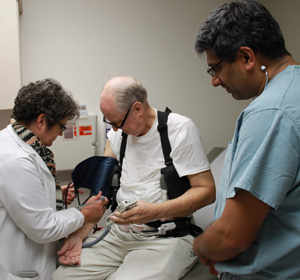 Slap a regular blood pressure cuff on Peter Westrum and you won’t get a reading. In fact, if you check his pulse, you probably won’t feel anything. But the Branson, Missouri, man is very much alive, thanks to a device that’s helping his heart circulate blood throughout his body. Westrum is the first patient at Mercy Hospital Springfield to be implanted with a left ventricular assist device (LVAD).

Until last July, 72-year-old Westrum thought he was in good health, until the sudden onset of heart symptoms. “We were on vacation and I was extremely short of breath,” he said. “I’d walk 25 to 30 feet and have to sit down. We were staying at hotels along the way and I’d make it from our room to the lobby, then from the lobby to the bus stop.”

Once Westrum and his wife, Sue, got home, he knew it was time to get help. “We got home on a Saturday and on Sunday I told Sue, ‘We’d better get to the ER.’ ” That’s when Peter learned he had advanced heart failure. He was later transferred to Mercy Hospital Springfield.

“The LVAD isn’t the first thing you try; it’s a last resort,” explained Dr. Gerard Oghlakian, Mercy cardiologist and medical director of heart failure programs. “We wanted to see if we could get his heart to work better, so we put in three stents. We told him to give it three months and we monitored him closely, seeing him every week.”

While Westrum did see a little improvement with walking, other daily activities were getting harder. “Whenever I ate, all the blood would rush to my stomach and I could hardly breathe,” he explained. “I told Sue I didn’t want to eat anymore.”

That was a turning point. “He was getting worse, not better,” said Dr. Oghlakian. “When he came into my office in a wheelchair, I knew we were losing ground.”

The heart team talked in depth with the Westrums about the possibility of implanting the LVAD. “You can think of it as a little jet engine for your heart,” explained Dr. Sunil Prasad, Mercy cardiac and thoracic surgeon. “It replaces some of the work of the left ventricle to circulate blood more efficiently throughout the body, getting the oxygen where it needs to go.” The device can give patients several more years of active life, or act as a bridge to transplant for those awaiting a new heart.

However, going through with the surgery is a life-changing decision, as patients must carry equipment, such as battery packs, wherever they go. “On the weekend, we talked to the Lord, called our children and asked them what they thought,” said Westrum. “Without the surgery, I might have three more good months, then four months of hospice and then say goodbye. We believed it wasn’t the Lord’s time to take me. We decided to have the insert to give me three to four more years– purposeful years. I called on Monday and told the team at Mercy, ‘It’s a go!’ ”

With that, the Christian missionary who’d spent decades translating the Bible for tribes in Southeast Asia took another fearless step. On Sept. 25, 2014, he became the first person to have an LVAD implanted in southwest Missouri. Mercy Hospital Springfield spent more than three years educating and assembling the right team, including Dr. Oghlakian as the heart failure medical director and Dr. Prasad, who implanted the devices more than 100 times before coming to Springfield.

“The first day – can you believe it? As our son, Scott, and grandson, Josh, watched, the medical team got me up and walking,” said Westrum with a smile. “It took six people. One of them was just pushing a chair behind me in case I didn’t make it, but I did. I went about 50 feet that first afternoon. Fifty feet is better than 30 feet, which is all I could do on vacation. That’s amazing when you think about it.”

After three weeks in the hospital, Westrum headed home. Theresa Witt, Mercy clinical nurse specialist and LVAD coordinator, not only stayed with the couple through much of their hospital stay; she went to their home to help set up the new equipment. Westrum said the biggest turning point for him happened just three days later when his son, who is also a missionary, Skyped from Moscow. “I’d just finished my nap. I sat up on the side of the bed and I said to myself, ‘Get up, get dressed, I want a nice shirt on and I’m going to comb my hair.’ I got myself looking good. I went into the office and peered into the door and I could see my son and daughter-in-law and their jaws dropped. I came in and boldly said, ‘David and Tonya, your dad has walked through the valley of the shadow of death but today I feel like I’m back in the land of the living!’ So that was the first big thing.”

While Westrum’s heart will continue to recover for six months after surgery, it’s already showing signs of getting stronger and he is definitely feeling better. “That’s why we do what we do,” said Dr. Prasad. “This technology allows us to take good people who’ve had bad things happen to them and return them to their lives. He’ll get Thanksgiving and Christmas and a quality life with his family.”

That’s exactly where Westrum plans to focus his energy – on his four children, 12 grandchildren and one great-grandchild. “I’m looking forward to a good, full life of serving the Lord and being a good husband to Sue and a father and grandfather,” he said. “I haven’t looked back and I anticipate going forward.”

For physicians or patients who think the LVAD could benefit them, Mercy offers a single-line referral: 417-820-2738.