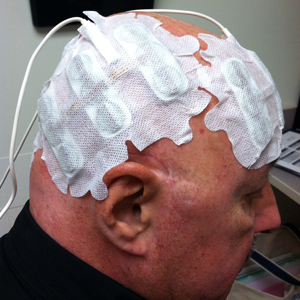 When he started repeatedly dropping things from his left hand, Dr. Robert Saylor suspected he had carpal tunnel syndrome or some simple nerve or orthopedic issue. He never suspected a highly-aggressive tumor was spreading in his brain. “I felt fine,” said the nephrologist and director of Ethics at Mercy Hospital Springfield.

He was quickly diagnosed with the most common and deadliest type of brain tumor, called a glioblastoma multiforme (GBM). These tumors often form “fingers” that spread into many areas of the brain, and while they are nearly impossible to completely remove with surgery, it is usually the first step in treatment.

After his surgery in Houston, Texas, Dr. Saylor spent 10 days at Mercy Rehabilitation Hospital Springfield, where he regained enough of his ability to walk, speak and swallow that he could return home and continue with outpatient therapy. He’d had radiation and was on chemotherapy, but colleagues began telling him there could be an additional option – a non-invasive device called “Optune” that could zap any remaining cancer cells.

“I was familiar with the clinic trials for the device from when I worked in St. Louis,” said Dr. Jerry Jaboin, Mercy radiation oncologist. “Back then, I was a little skeptical, but the initial study results blew me away.” Dr. Saylor checked out the data for himself and became the first local patient to try it.

With Optune, electrodes on the patient’s scalp send wave-like electrical fields into the brain. “It basically confuses the cancer cells,” Dr. Jaboin explained. “When they try to divide, they die. The electrical fields don’t bother the healthy brain tissue, because regular adult brain cells don’t divide.” The unit can either be plugged into a power source or a battery pack, and patients run it for 18 hours each day.

“The only thing I can feel is a little heat sometimes on the top of my head,” Dr. Saylor said. “Taking the battery pack with you wherever you go can be a bit of a hassle, and you do have to be bald. But those are the only drawbacks. It’s nothing compared to the nausea and other side effects you’d expect with some cancer treatments.”

Until now, patients with GBM had a life expectancy of just more than a year. The study revealed that 48 percent more patients were still alive at two years when they used chemotherapy along with Optune compared to those who used chemotherapy alone. In Dr. Saylor’s case, his latest brain scan looked even better than the one right after his surgery, indicating the therapy is working.

“He’s breaking new ground with his willingness to try this new technology,” said Dr. Jaboin. “When he first came in after surgery, he was in a wheelchair. Now, he’s walking in with a smile on his face and is back at work part time. It’s really fun for us to watch how much he’s improved.”

With Dr. Saylor’s medical background, being on the cutting edge was especially appealing. “This is a horrible cancer, and there haven’t been any therapeutic options,” he said. “This is exciting and is easy to do. It will be even better if it can someday be used to treat other cancers as well.”

Mercy Springfield is the first Mercy location to offer this therapy. “This will be great for local patients, who won’t have to travel to see their health care professionals,” said Dr. Kimberly Creach, Mercy radiation oncologist. “In patients with limited life span, every moment counts. Who wants to spend that time on the road to see a doctor?”

Dr. Jaboin says Optune offers patients hope where there was little before. “This is just the tip of the iceberg. We’re hopeful this kind of technology will one day move GBM from the ‘terminal’ cancer column to the ‘curable’ one.”