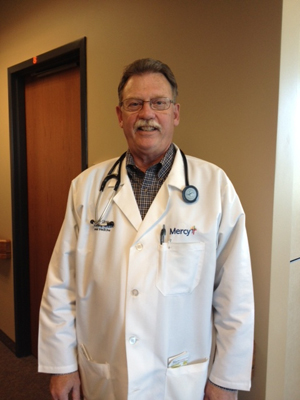 Anyone who says laughter is the best medicine must know Dr. William Cottingham. The admired physician and self-proclaimed prankster at Mercy Clinic Internal Medicine – Rolla had one last laugh: he threw in the towel after nearly four decades of practicing.

“I came back to Rolla fresh out of my internal medicine residency in 1978 and I’ve been in the same place ever since,” he said. So what’s his secret to a fun and successful 36 years? “Enthusiasm. It’s contagious and makes everybody else feel better about what they do. Sometimes our jobs are tedious and sometimes they’re sad. Fortunately, sometimes our jobs are happy, so if you can enjoy yourself and keep yourself and co-workers happy and enjoy each other, it makes for a better environment and the time goes by quickly.”

“Oh, he’s a comedian,” laughed nurse Sherry Edwards, who has worked alongside Dr. Cottingham for nearly 20 years. “He tapes phones down, turns screens around so our words are backwards – when something like that was happening, we knew it was him. He lives to tell jokes and he really knows his crowd.”

“It’s a small town attitude where everybody knows everybody,” said Dr. Cottingham, a Rolla native who is proud to say he has lived in the same home for 32 years. “You look after your friends and co-workers and they look after you. It’s what anybody else would do.”

“I have the utmost respect for him,” added Edwards. “Everyone around here knows him and it’s not just on a doctor-patient level. He listens. He’s like a teacher, teaching patients about their conditions. If someone has diabetes, for example, he goes in depth on what is going on with their body.”

“I was told when I went into internal medicine that I should read and learn something new every day,” said Dr. Cottingham. “It’s one of the things I’ve tried to do. As a physician and professional, you definitely should connect with your community and serve your community and help meet community needs.”

From light-hearted office fun to dealing with tragedy, Dr. Cottingham has left a mark on those around him. “My husband passed away with colon cancer last year,” added Edwards. “Dr. Cottingham was his primary care physician, and worked really closely with me during that time. He was very compassionate and followed me all the way through to the end. He will really be missed.”

Dr. Cottingham’s last day was April 30. A goodbye celebration was held Monday, April 28, just days before he left the office for good.

"On his last day, he came in to show me his shoes and told me he bought them in 1964," said Tricia Knapp, clinic manager. "His mother was so mad at him because they were $40 shoes and that was very expensive back then! He argued he'd have them forever and they were that good of shoes. He wore them when he graduated high school, graduated college, got married, his first day of working with us, and now his final day with us."

Dr. Cottingham plans to stay in Rolla and spend more time with his wife, as well as travel to see his five grandchildren. “They remind me that I didn’t take them fishing last year, so that’s one thing I’m going to remedy.” His patients have been receiving farewell letters in the mail, enclosed with a Dr. Seuss quote, “How did it get so late so soon? It's night before it's afternoon. December is here before it's June. My goodness how the time has flown. How did it get so late so soon?”