Does Your Toddler Have Type 1 Diabetes? 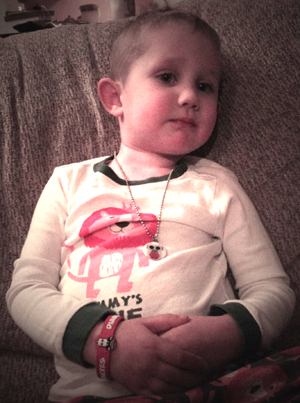 Potty training a toddler isn’t easy, so when Liam Vestal hit that milestone at 26 months, his mom couldn’t be prouder. But shortly after Liam’s third birthday, his mom began noticing he was also wetting his bed.

“I brushed it off the first couple of days, but it kept happening – and multiple times a night,” said Terra Vestal. “I got that gut feeling that something just wasn’t right.” Being a nurse, she began recognizing a cycle of increased urination and thirst, so she had Liam’s pediatrician at Mercy check glucose levels. “Turns out he had a blood sugar level of 380. That’s through the roof, because over 100 is technically high.”

Liam was admitted to Mercy Kids where he stayed for three days. “We worried about Liam,” said Dr. David Schwartz with Mercy Pediatric Endocrinology & Diabetes. “He was not in DKA (diabetic ketoacidosis), but because of his young age, he was at risk of serious consequences. DKA happens when the body can’t use glucose as a fuel source because there isn’t enough insulin being produced, and it can lead to death and brain swelling.”

Liam was diagnosed with Type 1 Diabetes (T1D), an autoimmune disease in which a person’s pancreas stops making insulin, a hormone that enables people to utilize energy from food. “He did relatively well those first few nights in the hospital, but anytime a kid hears the word ‘shots,’ they are immediately apprehensive,” said Vestal. “We had to hold him down a lot in the beginning.”

According to the Juvenile Diabetes Research Foundation, the number of people under the age of 20 who have T1D rose by about 23 percent over the last 15 years. More than 15,000 children are diagnosed in the United States each year; however, only 15 percent of people living with T1D are children.

“It can happen to any race or ethnicity,” added Dr. Schwartz. “And anyone at any age can develop it, but there are peak instances: around age 2, the first grade age group, early adolescence and the early 30s.” And as kids grow older, it’s harder for parents to track their patterns. “Liam’s mom was lucky to catch it, so he didn’t have to stay in the pediatric intensive care unit. It’s a reminder that parents should be on the lookout for the top three diabetes symptoms: increased urination and thirst, potential weight loss and increased appetite, which is commonly listed as a symptom but not as commonly recognized in children.”

Young or old, it’s imperative to have survival skills. “While they were here, we wanted Liam and his family to understand blood sugar, calculate and dose insulin, calculate calories and then dose insulin accordingly, based on the food he consumed,” said Dr. Schwartz. “We want the family aware of the signs and symptoms of too little insulin, but also the consequences of too much insulin. Also, a lot of places will hospitalize children for about a week, but we don’t do that. We get them in and out because I want them back in their home and their usual routine as soon as possible. That’s when we fine-tune dosing.”

“Dr. Schwartz was adamant that Liam eat pretty much the way he normally does,” added Vestal. “Now Liam gets blood sugar tests every morning and every couple of hours from that point on, depending on when he eats. He gets insulin injections in the morning and with every meal and he has realized that it isn’t an option. Every time he eats he asks if he needs a shot. He asks if it’s high or low and if he can have a juice.”

Being diagnosed with Type 1 Diabetes can be overwhelming, so Mercy follows up with diabetes education after prescribing a treatment plan. Liam checks in with his pediatric diabetes team about every three months. “His diabetic nurses and nutritionists are phenomenal,” added Vestal. “Even after discharge, they’ve been wonderful to ask questions to. We can contact them by phone, fax, email and Mercy’s neat ‘MyMercy’ system. They’ve even offered to meet with grandparents, his preschool and anyone else to educate them.”