OKLAHOMA CITY – Loretta Caram and Kathy Harris remember life at Mercy Hospital in Oklahoma City when the current facility opened 40 years ago — a forward-thinking, state-of-the-art hospital in a rural setting surrounded by farmland and cows.

Caram and Harris are among an exclusive group of 10 Mercy co-workers who have been with the hospital since before it moved from its downtown Oklahoma City location to the current site at 4300 West Memorial Road in August 1974 — 40 years ago this week. 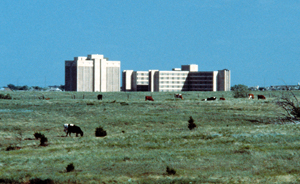 “Each day, I drove north on May Avenue, past Britton Road, to the hospital and there was hardly any traffic,” said Harris, assistant nurse manager for neurological and gynecological surgery at Mercy. “When you turned onto Memorial, you were surrounded by farmland. You had to be sure your car had gas because there were no gas stations nearby.”

Caram offered similar sentiments. She grew up about half a mile from the current Mercy location and watched the hospital being built. She has also witnessed the many changes it has undergone in the four decades since.

“The addition of the large white cross atop the tower was another milestone,” said Caram, operations analyst in the Supply Chain Administration Department at Mercy. “It became a beacon for those looking for Mercy, as well as a reminder of our mission. I’m pleased to know I was part of the early days, the continued expansion and the positive impact of Mercy on the community.”

When You Build it, They Will Come

Due to growth at Mercy in the late 1960s and projected future growth in Oklahoma City, the Sisters of Mercy, led by Sister Mary Coletta Massoth, began investigating the creation of a much larger hospital.

The sisters chose the 40-acre property in northwest Oklahoma City because the area was projected to grow by more than 50 percent and the much larger property would allow for future hospital expansion.

“Mercy’s location on the city’s future ‘outer loop’ will soon make it one of the more easily-accessible hospitals,” according to a Mercy supplement in The Oklahoman from Aug. 18, 1974. “Mercy will be an oasis in the middle of residential development, motels, shopping centers and offices.”

And the rest is history.

Since Mercy opened its doors 40 years ago, Memorial Road and all of northwest Oklahoma City have transformed from farm prairie into a fast-growing retail and health care corridor. Mercy has grown from the original 225 patient beds in 1974 to 380 today.

“We are so thankful that Sister Coletta and all of the Sisters of Mercy had the foresight to build in the northwest part of the city,” said Jim Gebhart, president of Mercy Hospital Oklahoma City. “Their intuition proved right and we are so happy we’ve been able to keep up with the community’s growing needs.”

When the current Mercy facility opened in 1974, it featured:

Although many of these innovations of the 1970s have been replaced with more modern technologies and practices, Gebhart says the pioneering spirit of the hospital from 40 years ago still remains at Mercy today.

“Like the Sisters, we remain forward-thinking as we continually find new ways to deliver convenient care to Oklahoma communities, while tackling national health care changes,” he said. “We are excited for the changes to come as we look to the next 40 years.”