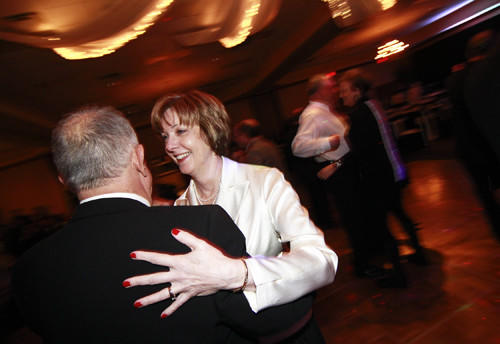 When it comes to generosity, the Berryville community has outdone itself. For the third year in a row, Mercy Hospital Berryville’s Black and White Charity Ball set a fundraising record.

“We had the highest attendance, the most sponsorships and the most dollars ever raised,” said Cody Qualls, executive director of Mercy Health Foundation Berryville. This year’s donors raised nearly $64,000, up from $56,000 in 2014.

“Once again, the support from the community has been tremendous,” Qualls added. “I couldn’t ask for a better outcome.”

The 12th annual event was held at the Inn of the Ozarks in Eureka Springs on Feb. 21. Through private donations, sponsorships, and silent and live auctions, donors pulled together $63,716; individual donations totaled $20,000. Thirty-four sponsors generated $22,000, which is an increase of $5,500 over the 2014 event.

Attendees at the Feb. 21 event were treated to dinner, live entertainment by local band “Red Ambition,” as well as a presentations by Mercy Berryville Hospital President Kristy Estrem and Mercy Health Foundation Board Chairman Bobby Thurman.

Fourteen Mercy physicians were in attendance, including Mercy Hospital Berryville’s Dr. Janet Shapter, who spoke about the importance of Stryker stretchers. “Funds from this year’s gala will pay for at least a half dozen of the stretchers,” Qualls said. “They’re becoming a standard of care and will greatly improve patient care in our emergency department.”

Qualls could not be happier with the results of the event. “I try to set a far-fetched goal every year, but then we hit it. We’re clearly blessed to be surrounded by such a generous community.”