celebrate in the chapel at Mercy Hospital Springfield 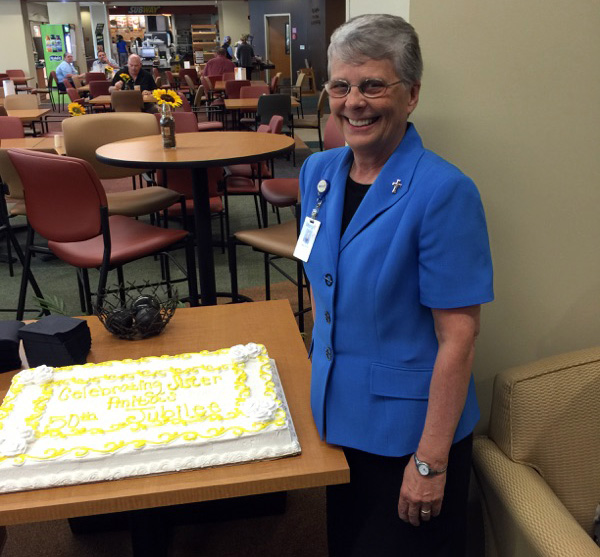 December is a month to give thanks, and for several reasons. Besides it being Christmas, this month, on December 12, Mercy recognized Foundation Day of the Sisters of Mercy. On that day in 1831, Catherine McAuley, Mary Ann Doyle and Elizabeth Harley took vows to become the first Sisters of Mercy and thus began a religious community dedicated to serving the poor, sick and uneducated. We thank the Sisters for 184 years of service!

“God bless Srs. Richard Mary, Margaret and Anita for their dedication to our communities and our co workers,” said co-worker Bill Hennessey in Springfield, Missouri. “We are inspired by your giving and compassion, and your presence is a constant reminder of the fact that we are called to serve as well. Congratulations Sisters, and thank you for the privilege of joining you in this awesome ministry!”

In celebration of the Jubilarians’ 50 years of service and in honor of the Jubilee Year of Mercy, recently announced by Pope Francis, Mercy's Sisters from Springfield, Joplin and Rogers, Arkansas, renewed their vows during special masses. “It was a privilege to be a witness to the vows of our current Sisters of Mercy," co-worker Ronnie Herman said.

“The celebrations remind me that God works through each of us to make a positive difference for others,” explained co-worker Lynn Langenberg. “What a wonderful testament and a reminder that what we have here at Mercy is unique and not found in all health systems.”

Congratulations Srs. Richard Mary, Margaret and Anita, and thank you to each of our Sisters for your testimony and guidance!