Mercy Aurora and Cassville Celebrate 125 Years in the Ozarks 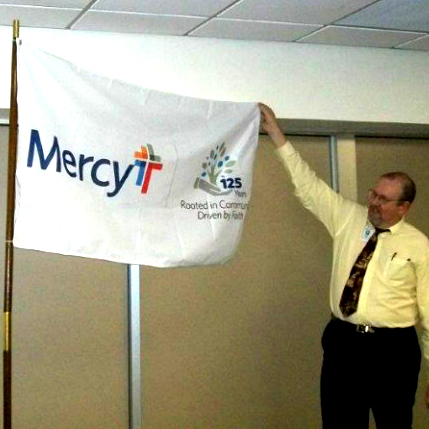 It all began in 1891, when the Sisters of Mercy responded to a plea for help in the Ozarks. Three Sisters traveled from St. Louis to Springfield, turning an eight-room house into the town’s first hospital.

“The foundation put in place by the Sisters remains solid,” said Doug Stroemel, administrator of Mercy Hospital Aurora and Mercy Hospital Cassville. “At every turn, we’re improving the technology and services we provide so we can reach more people than ever before.”

To celebrate Mercy’s 125th year of service in the Ozarks, Mercy hosted special flag presentation ceremonies in January at Mercy Hospital Aurora and Mercy Hospital Cassville. Each ceremony included a symbolic flag presentation by some of Mercy’s most seasoned co-workers. There were also special addresses, invocations, anniversary messages by Sister Cabrini Koelsch and a prayer.

Follow #Mercy125 on social media for photos of all the events.