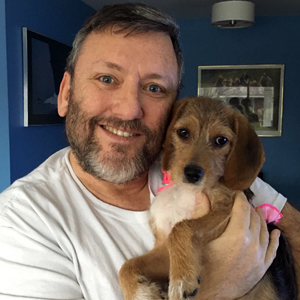 David Grafman with his puppy Mercy. 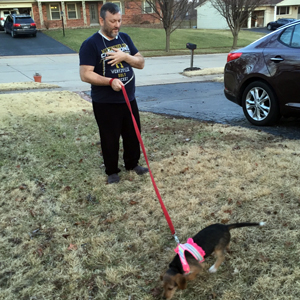 Mercy quickly helped David get up and moving.

ST. LOUIS - Knowing the symptoms of heart disease isn’t new to David Grafman; it runs in his family. However, when he started having stomach pains he didn’t think about heart issues.

The 54-year-old hockey referee used a sports analogy to explain. “If someone tells me to watch No. 12 because he plays dirty, I’m going to watch No. 12 but might miss what No. 22 is doing behind me,” Grafman explained. “That’s what happened. I missed the heart symptoms because I was focused on my stomach.”

When he finally had a stress test for his heart, he only made it for eight minutes before he was drenched with sweat and curled up in a fetal position on the table. “They didn’t hit the panic button, but everyone was moving very quickly,” he said.

Grafman was immediately admitted for a cardiac catheterization procedure. He said he was in good spirits, even joking while he was on the table. But that’s when he realized the seriousness of the situation. The cath procedure couldn’t help him; he would need open heart surgery as soon as possible.

He met with cardiothoracic surgeon Dr. Mark Blucher to discuss his options and was quickly scheduled for surgery.

After his procedure, he woke up with a nurse in his room. “She said, ‘I’m Emily and I’ll be your nurse,’” Grafman choked up. “My mother’s name was Emily, so it was really emotional and a great sign.”

Grafman couldn’t stop gushing about his care – the doctors, nurses, techs and more, “even the people who brought my food were great. The food was even good. You always hear those stories about ‘that one nurse’ and I never had that. Everyone I encountered was terrific.”

The experience he had leads the story to his new puppy. Once home, Grafman’s wife went to get some salt-free spices and stopped in the pet store on a whim. She messaged him with a picture, and he surprisingly agreed to let her bring the puppy home.

“I’ve always heard dogs are great for therapy, and I knew it would give me something to focus on, get me out walking and be a symbol of my recovery,” Grafman recalled.

But what to name the new puppy wasn’t as easy. He joked about naming the dog Blucher to honor his doctor, but didn’t want it to be taken the wrong way. They ultimately decided on Mercy.

“I have never heard of a dog named Mercy,” Grafman said. “Now she will always remind me of the excellent care I received, and that without the dedicated people and their wonderful attitudes, things might have been different.”