4-year-old is First Pediatric Patient in U.S. to Get Laser Cataract Removal 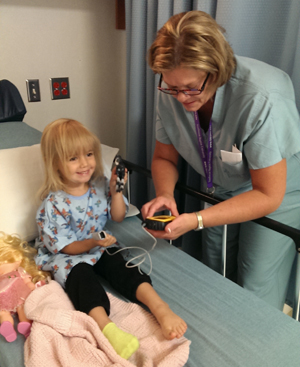 It was a simple walk, but her excitement over a flock of birds was extraordinary. It was at that moment Erin Crain realized his 4-year-old daughter Alyssa could finally see.

Just a few weeks before, she became the first pediatric patient in the United States to have cataracts removed using a femtosecond laser. Mercy Hospital Springfield invested in two lasers in spring 2013, beginning groundbreaking laser cataract surgery for all patients, with no additional charge.

Cataracts in children are rare but need to be treated quickly so the child’s brain can develop the ability to see. “I didn’t even realize kids can get cataracts,” said Erin. “I took her to the eye doctor because she was stumbling over things and having trouble walking, so I suspected she needed glasses.”

Their appointment with Mercy pediatric ophthalmologist Dr. Scott Atkinson revealed Alyssa’s cataracts were so bad she couldn’t even see her father’s face. Her only chance at sight was surgery, but Erin was presented with a historic choice. His daughter could have traditional cataract surgery or for the first time ever outside of Europe, he could opt for laser precision.

Removing a cataract in a child is much more complicated than in an adult eye. “In children, the capsule of the cataract is like plastic wrap,” said Mercy ophthalmologist Dr. Wendell Scott, who performed the surgery. “With the traditional technique, it’s like tearing the plastic wrap in two by stretching it until you pull it apart. The laser can make a perfectly round incision without pulling or tearing. Plus, there’s an additional step in kids. You have to remove a portion of the back of the lens as well, or it will begin to cloud up, obstructing vision all over again.”

Mercy’s ophthalmology team knew from working with a colleague in Germany that the femtosecond laser could achieve cleaner cuts, helping doctors place the new lens more accurately. It was an easy decision for Erin. “I like anything that has to do with technology that improves speed and accuracy. I just felt more comfortable with the laser. Besides, my daughter’s only other option was blindness, anyway. This was her best shot at a normal life.”

Surgery was scheduled on the right eye first. The staff eased Alyssa’s fears by first “treating” the doll she brought with her. “They really took the time to make her feel comfortable,” Erin explained. After getting good results with the first eye, Dr. Scott performed surgery on the second eye a few weeks later. The results are 20/40 vision. Erin says it’s changed Alyssa’s life.

“The difference is night and day,” raved Erin. “In school she can now do things she couldn’t do before, like cut out pictures. I get choked up when I talk about it, but one of her favorite things to do now is go outside at night and look at stars. She’d never seen them before. I’m so grateful Mercy had the technology to do this. I don’t think we would’ve had this outcome otherwise. I’m really excited about what this means not just for my daughter but other children as well.”

Mercy Springfield ophthalmologists are now planning a research project to demonstrate that femtosecond laser cataract surgery can be performed safely in pediatric patients. The study will involve 20 patients, ages 18 and younger, who are scheduled for routine cataract removal.

“We would invite patients from all over the country to participate in this study,” said Dr. Scott, who will serve as the principal investigator. “We really feel this is a safer, more effective way to remove cataracts in children, giving them the best chance at normal sight. We will be anxious to report our findings.”