Track Star Gets Back in the Running 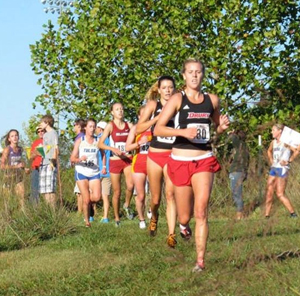 Olivia Willoughby leads the pack during a recent meet.

With the wind in her hair and her competitors at her back, Olivia Willoughby loved to run, and she was fast. But sudden, painful leg cramps began hitting her during meets her freshman year in high school. “It wasn’t an average cramp that you can just stretch out,” said Willoughby. “This was like someone was stabbing knives into my calves and twisting them.” Doctors were stumped.

“We moved from Colorado to Pennsylvania, and despite numerous tests in both states, no one had an answer,” explained Willoughby. “They would always just tell me to find another sport and quit running. But running is my passion.”

The problem kept getting worse. By the time Olivia moved to Springfield, Mo., her junior year, she was collapsing at the end of races. She was still fast enough to qualify for state competition – until she passed out at the end of a race. That’s when she ended up in the office of Dr. Brian Mahaffey, director of Mercy Sports Medicine.

“I suspected her problem could be an exercise-induced muscle or nerve condition, some type of vascular issue, or the way she was running,” said Dr. Mahaffey. “To rule out the conditions that would be easiest to treat, I sent her to see our athletic training staff for an evaluation.”

Willoughby worked with Jim Raynor, Mercy Sports Medicine and Fitness director. “It was the first time someone really wanted to help me figure out the problem and wasn’t telling me to quit running,” she said.

“Telling a distance runner not to run is like asking them not to breathe,” said Raynor. “It’s our job to identify the cause of the problem and get them back to doing what they love.” Raynor worked with Willoughby on correcting her gait, and she showed immediate improvement. “Then she was suddenly right back where she started,” he said. “And that’s when the proverbial red light went off.”

Raynor quickly consulted with Dr. Mahaffey. Both suspected there was a problem with Willoughby’s blood supply, but it would take some unusual tests to be certain. “Our vascular lab was very helpful, along with our musculoskeletal radiologists,” said Dr. Mahaffey. “They were willing to let us run an ultrasound on her vascular system right after she ran for 15 minutes.”

That was the trick. The tests showed Willoughby suffered from popliteal artery entrapment syndrome. “In other words, the circulation to the main arteries in my legs was getting shut off whenever I would point or flex my toes,” said Willoughby.

“Olivia had fibrous bands that were compressing her arteries,” explained Dr. Jon Reese, Mercy vascular surgeon. It would be his job to go into the backs of her legs and free those arteries. Willoughby’s surgery was scheduled for the first part of September – several weeks away and at the beginning of her senior year of high school. Knowing she couldn’t run during that time, Willoughby worked with Mercy trainers. She kept her muscles strong with kettle bell swing and kept her heart conditioned with time on the rowing machine.

Because both legs were affected, the surgery took several hours. “That artery is beneath a lot of important structures,” said Dr. Reese. “Releasing all that fibrous tissue in that setting was quite tedious.”

Willoughby was walking right after surgery, but couldn’t run for six weeks while her legs healed. That gave her just four days of running before district cross country competition. “My calves still hurt, but I realized I had to rebuild my muscles and my nerves.” Despite the pain, she made it to sectionals, but didn’t qualify for state. “It was probably for the best. It gave me time to heal. Plus, I got a spot on the diving team at my high school that winter which also gave my legs a break.”

Spring brought track season, and by that time, Willoughby was ready. Her first workout with the team was a breakthrough. “It was the first time I’d ever completed a workout at the front of the pack and not felt any pain. I just started crying. I was so overwhelmed and just so happy.”

It led to a scholarship offer at Drury University in Springfield. “Drury was never on my radar, but after they offered me an academic and athletic scholarship, I thought, ‘Mercy is here. I’ll still have that connection and I can still get help from that team.’” It was a good decision. Along with track, Willoughby is on the dive team and was the fastest freshman at Drury during cross country season.

“I’m so happy she’s back to doing what she enjoys,” said Dr. Mahaffey. “If we hadn’t figured it out, she wouldn’t have gotten the athletic scholarship. Our team approach is always focused on getting our patients back to the activities they enjoy safely, quickly and with more success than when we first saw them.”

Willoughby says her care team at Mercy still inspires her. “Sometimes when I’m running I’ll think about it and everyone who’s helped me. When I get tired it helps me keep pushing. I want to be the best I can be for myself and for everyone else who’s done so much for me. Mercy is amazing.”