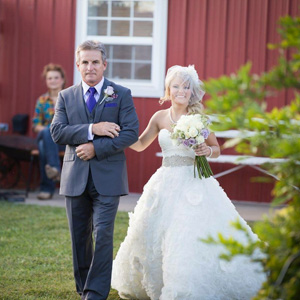 Bart Williams walks his daughter, Madison, down the aisle.

Lots of little girls dream of their daddy walking them down the aisle, but one father’s mishap almost ruined that vision.

The story actually begins six months before the big wedding day, when the father of the bride, Bart Williams, broke his left collarbone skiing in Colorado. Dr. Victor Wilson, Mercy orthopedic surgeon, repaired it with a plate and Williams had just resumed all the outdoor activities he loves.

The weekend before his daughter, Madison, got married, Williams was out on his bicycle and crashed again. With experience as his guide, he was sure he had broken his other collarbone.

“We headed to the emergency room, and they confirmed it,” he said. “Dr. Wilson’s nurse called first thing the next morning and when she heard about the wedding, she got me in to see the doctor within the hour. Dr. Wilson discovered the break had gotten much worse overnight and the bone was nearly shattered, requiring a surgical repair.”

The break had to be fixed, but Williams was worried he’d be forced to miss the rehearsal dinner and the wedding. “He would’ve been fairly miserable, too,” said Dr. Wilson, who rearranged his schedule to get Williams onto the operating table the very next day. “I was thrilled to give Bart and his family the ability to better enjoy their daughter’s wedding day.”

It meant more than Dr. Wilson might have imagined. “It was unbelievable,” Williams said. “I broke my collarbone on Monday, saw the doctor on Tuesday, had surgery on Wednesday and was able to walk my daughter down the aisle and even dance at the reception on Saturday. Dr. Wilson and his staff went above and beyond to repair my injury and help me avoid disappointing my little girl on her special day.”

The wedding went off without a hitch – except for the one between the bride and the groom. And the next time Williams crashes, Dr. Wilson will be ready.