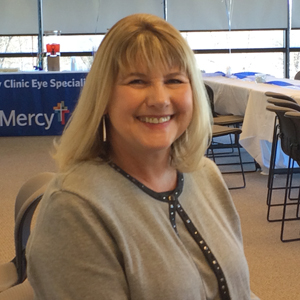 to get laser cataract removal.

With a commitment to provide the best, most technologically advanced eye care at no additional cost, Mercy ophthalmologists have reached a national milestone in care. 10,000 local patients have now benefited from laser cataract removal, and their doctors are the most experienced in the country at using the Catalys Precision Laser System.

Sister Richard Mary Burke had never had any type of surgery, but she couldn’t ignore the cataracts developing in her eyes. “I was quite nervous and apprehensive,” she remembered. “But when I learned they could remove the cataracts with a laser and not an old-fashioned blade, it helped.”

Mercy ophthalmologists began using the Catalys Precision Laser System in March 2013 for all cataract removals. Until this latest innovation from Abbott, doctors had used blades for centuries to break up and remove cataracts. With the new technology, a laser system maps the eye, makes a precise cut and enables the doctors to position the patient’s new lens with unsurpassed accuracy. In fact, a study in the Journal of Cataract & Refractive Surgery showed the laser was about 10 times more accurate than the manual technique.

“Beyond the technology, the care and genuine compassion from my physician and the staff helped me relax,” Burke said. “When he was finished, my doctor proudly proclaimed, ‘Sister, we are finished, and you have done very well.’ I replied, ‘Doctor, I never knew you were so handsome!’ “

Along with being the first to bring the technology to the region, Mercy ophthalmologists were the first in the country to offer the surgery with no extra charge. While most patients over the age of 65 can expect Medicare to cover the cost of cataract removal, that isn’t true for patients who opt for a more expensive laser removal. Mercy took cost out of the equation. “This is the best way to perform cataract surgery, and it didn’t feel right to us to only offer it those who could afford it,” said Dr. Shachar Tauber, section chair of Mercy ophthalmology. “All of our patients deserve to have their cataracts removed with the laser.”

With that philosophy, patients flocked to Mercy for the procedure. With experience under their belt, the ophthalmologists felt confident about breaking ground and performing the first pediatric laser cataract removal in the nation. Four-year-old Alyssa Crain was diagnosed with the rare condition after a trip to the eye doctor. Within weeks she was seeing things she’d never seen before – like birds and stars. “It was a complete life-changer for her,” her father, Erin, said. “She is reading all the time, when before she couldn’t even see the page. She is engaged in class and is now in gymnastics. She wouldn’t have been able to do any of it without the surgery.”

Debbie Westfall was Mercy’s 10,000th patient. At age 61, she developed cataracts at a much younger age than most adults and they were quickly getting worse. “It was like I was looking through a veil,” she said. “Trying to read was the worst. I used a magnifier and reading glasses.” Westfall works at a computer all day, so she was ready to get her eyes fixed.

“I went to work the day after surgery,” she said. “I worked for two and a half hours before I realized I hadn’t put on my reading glasses.” In fact, Westfall now has 20-15 vision and says she had no pain or even discomfort with the surgery. “They gave me back my sight,” she said.