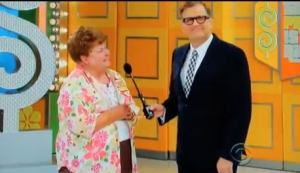 Drew Carey during her appearance on "The Price is Right"

“Come on down, you’re the next contestant on ‘The Price is Right’” … Sister Rebecca Hendricks says she was in shock when she heard this famous phrase with her name in front of it.

Sister Rebecca and Sister Judith Marie Keith, two Sisters of Mercy from Fort Smith, Ark., accompanied another Sister on a trip to California this summer to see a friend.  While the Sister was visiting with her friend, the other pair decided to go see a show. Because it was early July, not many shows were taping but “The Price is Right” was in production.

“We just went on a whim. There were a few standby tickets available and we got a couple of them. We were literally up in the rafters on the back row. I really didn’t think there was any chance one of us would be called,” said Sister Rebecca.

In fact, Sister Rebecca’s was the third name called. She earned her way on to the stage by not only guessing the closest amount to the home theater system on display but the exact amount …$700.

“I thought I was bidding on a camera. It wasn’t until afterward I found out it was some kind of surround sound. I was just so shook up when it was happening.”

Once on the stage, host Drew Carey asked Sister Rebecca what she did for a living.

Sister Rebecca is certainly known for her sense of humor. She is a former vice president of Mercy Hospital in Fort Smith and is still a primary board member for Mercy. She got several big laughs from Carey during the show but her big win came on the “range game”. She had to guess within $150 the price of a complete home gym.

“You’re about to be a muscle bound nun”, said the announcer.

He was right. She won the $5,332 prize by guessing in the correct range.

Of course, as a Sister of Mercy Sister Rebecca has taken a vow of poverty. So she’ll be talking with the president of her community about what to do with her winnings.

Sister Rebecca also had a chance to get to the showcase showdown by spinning the wheel but instead things worked out just like she wanted.

"I was just praying that I wouldn’t win at the big wheel. God was good because the right person won and she was very deserving. She told me after the show that she had never owned a car and never thought she would. For me that was the best part of the show.”

The worst part of the show was not being able to tell anyone about it. Following the taping on July 3, Sister Rebecca had to sign a confidentiality agreement saying she wouldn’t tell anyone about the outcome until after the show aired more than three months later on October 22.  Now the cat’s finally out of the bag and Sister Rebecca is starting to hear from friends and family who saw the episode.

“They’ve all been surprised and some a little upset I hadn’t told them,” she joked. “It was just such an experience and I really never dreamed it would have happened when we went to the show that day.”