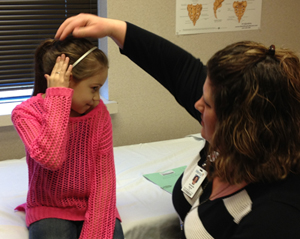 Kadynce Amaya at a follow-up appointment

As the first flurries fall, kids start dreaming of  snowball fights and speeding down hills on their sleds. Other than a few cold noses or frostnipped fingers, most don’t get hurt. But 7-year-old Kadynce Amaya took quite a spill on her sled – and it took a couple of heroes to get her the help she needed.

“She’s a tough little turkey, but she was inconsolable,” said her father, Alex Amaya. “Her head hurt, she couldn’t remember sledding, and then her stomach started hurting. That’s when her mom took her to the emergency room.”

When she showed up at Mercy Hospital Northwest Arkansas in Rogers, a scan of her brain showed bleeding, and staff knew she needed to be transported to Mercy’s children’s hospital in Springfield for more specialized care. Winter weather conditions made a Mercy helicopter transport dangerous, and without a Mercy ambulance service in the immediate area, staff put out a call for a ground crew. “Our co-workers contacted all local transport agencies and the Arkansas Trauma System to arrange for transportation to Springfield,” said Michele Diedrich, chief nursing officer at Mercy Hospital Northwest Arkansas. “But due to the inclement weather, no one was available.”

Mercy staff and Kadynce’s parents were getting worried. “I was getting really upset,” said Kadynce’s mom, Kristina Courtney.

Emergency staff wouldn’t give up, and called Mercy Springfield’s Emergency Medical Services (EMS) for help. Dispatchers there sent the nearest Mercy ambulance to pick up Kadynce, but it was about 60 miles away in Green Forest, Ark. EMT Jeff Webb and Paramedic Dillon Halper took the call. “In this line of work you can’t refuse to do something,” said Halper. “We had six inches of snow and about an inch of ice under the snow, but we were not going to let this little girl’s care be delayed any longer.”

When they arrived in Rogers about two hours later, the EMS crew got quite the welcome. “They were welcomed by our co-workers with hugs and feelings of pride for Mercy,” said Diedrich.

Within minutes, they were on the road to Mercy’s children’s hospital in Springfield. “I couldn’t wait to get there, and I was also dreading it,” explained Kristina. “I wanted to get her help as soon as possible, but I was so worried about her having surgery.”

It didn’t take long for their fears to subside. When they arrived, the staff was waiting on them. Soon, Dr. Sami Khoshyomn, Mercy Kids pediatric neurosurgeon, explained that surgery might not be necessary. “The hemorrhage was rather small and I felt we could watch it closely,” said Dr. Sami. “Still, it was a good thing she was here, in case her condition worsened and we needed to operate.”

After a couple of days in the hospital, Kadynce headed home, and never had to have the surgery her mother was dreading. “Dr. Sami was so calm and confident. We didn’t have to leave the hospital with any doubts,” said Kristina. While Kadynce won’t be sledding or doing gymnastics for a few more months, a recent checkup showed she’s on her way to recovery.

Looking back, Mercy teams from Springfield to Rogers to Green Forest keep commenting on how well their co-workers connected to get this little girl the help she needed. “I want these heroes to know they will always be remembered by Mercy Northwest Arkansas with love and respect,” said Diedrich.

“Hero” isn’t a title Halper is ready to use; he says it’s all in a day’s work. “I have been in this job since I was 18 years old and never once have I refused to do a call. No matter what time of day it is, no matter how dangerous it is, this is what I chose to do for a living. I’ll never have an excuse not to help people.”