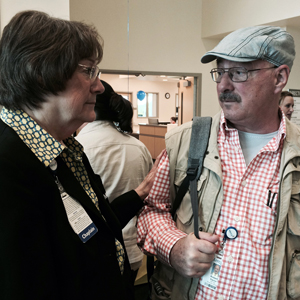 during the rehab hospital anniversary celebration.

Diagnosed with a highly-aggressive brain tumor, Dr. Robert Saylor, nephrologist and director of Ethics at Mercy Hospital Springfield, knew he wanted aggressive treatment. He had as much of the tumor removed as possible in Houston, Texas, then returned to Mercy Rehabilitation Hospital Springfield for more therapy.

“When I came back, I had trouble moving my left side,” Dr. Saylor said. “I honestly worried I would never walk again. There was one point where my wife had to have someone carry me to the car. My speech and ability to swallow were also affected.” But, after just a 10-day stay at the rehabilitation hospital, Dr. Saylor was ready to go home and continue with outpatient therapy.

“Body neglect is an important factor in rehabilitation for people with right-sided brain injury,” said Dr. Hollis Bell, medical director for Mercy Rehabilitation Hospital Springfield. “Their brain just stops paying attention to the left side, so in addition to addressing weakness and numbness, we had to remind his brain that his left side even existed. To address that, we always approached him from the left side and made him turn his head toward us.”

The therapy was highly successful. “I made tremendous advancements because of the people here,” Dr. Saylor said. “They pushed me during therapy and made me work at it. They also worked very closely with my wife so she could be a partner in the process. Without their expertise, I wouldn’t have been able to get back home. I owe them big.”

Beyond the physical, speech and occupational therapy, Dr. Bell says bringing Dr. Saylor home to Springfield for his rehabilitation was a big factor in his speedy progress. “Dr. Saylor had the psychological support of being in his hometown,” she said. “Facing this sort of battle is easier when your wife, children and grandchildren are by your side. We were able to make recommendations for home modifications and equipment by evaluating him in his own environment. This relieved a great deal of anxiety for them.”

Dr. Saylor is one of many “graduates” of the program at Mercy Rehabilitation Hospital Springfield. Since opening last April, 780 patients and their families have benefitted from the comprehensive therapy program with more than 78 percent returning home after their stay. Now that Dr. Saylor is walking and driving again, he’s focused on a new treatment, where electromagnetic impulses continually target cancer cells in his brain. He is the first patient to receive that treatment in the Ozarks.