Superhero Gets to Fly 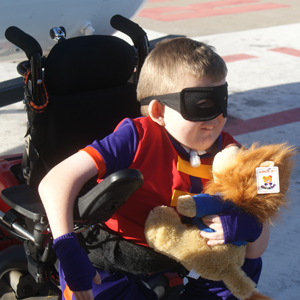 Collin Langston got to fly with Mercy Life Line.

It’s that time of year when a lot of kids are filling out wish lists, but Collin Langston’s had nothing to do with Christmas or even his upcoming 11th birthday. His dream was to be a superhero and save his hometown of Springfield, Missouri.

Collin was born with several conditions; one causes his joints to contract so he can’t straighten his legs. He was also born with a small ribcage, which makes it difficult for his lungs to expand. When he stumbled onto information about Make-A-Wish®, his parents looked into it.

“His condition isn’t degenerative, but it also isn’t going to get any better,” explained Collin’s mom, Sarah. “He’s always been into characters, so he asked to become a superhero for a day.”

His day began with his mom’s purse getting “stolen” from a local restaurant. His dad, Chris, helped him change into his Robin-inspired costume quickly so he could chase down the villain. From there, the Springfield Fire Department picked him up and took him through town, where he helped Springfield Police apprehend a villain who was bullying “Louie,” the Springfield Cardinals’ mascot. Batman even showed up to help Collin, and the mayor pro-tem read a proclamation in honor of his bravery.

But there was one piece missing: this little superhero wanted to leave his wheelchair behind and fly.

That’s where Mercy Life Line came in a few weeks later. Collin and his dad rode with an air ambulance crew, which took him over city landmarks like Hammons Field and Bass Pro Shops. He also got a birds-eye view of his school and his house.

When he landed, the crew presented him with a “Mercy Life Lion” – a comforting stuffed animal they try to hand out to all kids who need a helicopter ride to the hospital.

“It couldn’t have turned out better,” Sarah said. “It was actually kind of fun to take the flight later so we could really enjoy it. It was really neat how the entire community embraced his wish.”

As for Collin, his smile says it all.