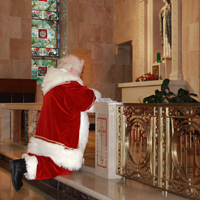 Robert Stone prays after each shift

as Santa at Mercy Hospital Springfield

It was Christmas Eve. Santa knelt in the chapel at Mercy Hospital Springfield, praying for all the patients he’d just visited, but in particular for a toddler named Gabriel who wasn’t waking up from a coma. What happened next could be considered a Christmas miracle.

The story begins several years before, in 1996. Robert Stone, a microbiology professor, had a major heart attack. He was so grateful for the care that saved his life that he decided to give back by volunteering at Mercy. His job was to help patients get to their vehicles at discharge time, until one day near Christmas, when the call went out for someone to play Santa for the pediatric patients. With a short white beard and the perfect figure, Robert was a natural fit for the donated suit.

“The experience that day was overwhelming,” he remembered. “It took my heart and messed around with it a little. It was such a wonderful thing to be able to convey the Christmas spirit and to see the joy that brings children, so I started doing it every year.”

One year in particular, Robert was troubled by the case of that little boy who wouldn’t awaken from his coma. He’d been stopping in every night to read, “The Night Before Christmas.” He’d just finished that task on Christmas Eve when he went into the chapel.

“I always go into the chapel after I do my Santa rounds. I pray for the people in the hospital who are sick and especially the children. I was praying for Gabriel, and I saw this angel that came to me from the altar. She was in a white robe, beautiful flowing blonde hair, and she spoke to me without moving her lips, with her arms extended. She told me to go see Gabriel one more time and then disappeared into the marble. I’m thinking to myself, ‘Did I just see that?’ I’m a scientist, but I believe what I saw was an angel.

“So I got up and went back down to Gabriel’s room and his mother was there. I told her I wanted to say goodbye. I walked over to his crib, and when I leaned over, my bells hit the metal crib and jingled. He opened his eyes and looked at me. I said, ‘Goodnight, Gabriel,’ and he said, ‘Goodnight, Santa.’ I looked over at his mother. He had come back for Santa. She ran and got the nurse, and I went down to an empty room where the tears just flowed.

“That was my present that year. Every single year, something like that happens that becomes my gift for being Santa Claus.”

It’s no wonder, then, that Robert portrays old Saint Nick year-round. He never shaves. He only owns red or white shirts, and both of his cars are red – including a red Jaguar convertible that says, “I am SC,” on the back. If his wife isn’t with him, you’ll see a giant teddy bear belted into the passenger seat. On weekends, he and his wife go out to eat and always bring a bag full of goodies with them. Naturally, the kids who see him always watch him closely.

“I’ll go around the restaurant and ask parents if I can give their children gifts. They always say yes. And I start giving out these presents to these little kids and you look around the restaurant and you can see a smile coming on people’s faces and you can see the waiters smiling and the cooks look out. That change is what I call the Christmas spirit.

“That’s what I try to bring to the hospital. Not only are the little children in pediatrics in need of that, but little kids on the elevator and in the parking lot and in the cafeteria. They’re here and they don’t understand why because someone in their family is sick or dying. You see the sadness on their face and when I come up to them in this crazy red suit and say, ‘Merry Christmas,’ and hand them a little toy, it changes their emotions. They have hope again and that’s what I call Christmas spirit.”

May we all remember to share the Christmas spirit throughout this season, and well into the New Year. Merry Christmas!