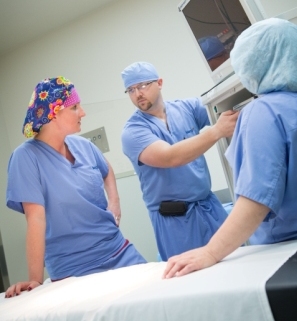 Dr. Phillip Fuller and nurses prepping for a surgery.

When Dr. Phillip Fuller was training in Columbia, Missouri, to become a urologist, he and other medical residents practiced removing pigs’ kidneys using a minimally invasive procedure.

By the time he graduated in 2014, he had become proficient in the commonly used technique, called laparoscopic hand-assisted nephrectomy.

Now Fuller has brought the procedure to Ada for the first time. He recently removed a patient’s kidney using a fiber optic camera and one hand. Kidneys may become cancerous or chronically infected, requiring their removal. The procedure also is used when a person wishes to donate a kidney. Only one kidney is needed to live.

“It’s kind of a cross between open and laparoscopic surgery,” Fuller said.

Laparoscopic surgery is typically the “gold standard” because of its minimal scarring and reduced impact on internal organs, but having a surgeon’s skilled hands inside a patient allows for dexterity to do things such as tie knots and massage nearby organs to promote circulation.

“The patients are able to get out of the hospital a day or two earlier and get back to work a few weeks earlier than they would have with the traditional technique,” Fuller explained.

Tammy Bridgeman, a registered nurse who oversees the operating room at Mercy Hospital, said the new procedure is much easier on patients.

It’s fitting that Fuller would be the first to bring the procedure to the area.

“I left Ada after high school with every intention of returning home to practice urology,” he said. “Working in the surgery department during high school, I was exposed to the healing power of medicine and the ability of surgeons to positively impact the quality of patients’ lives.”

Bridgeman is pleased the new procedure will save patients from having to travel to Oklahoma City or Dallas. Offering cutting-edge procedures also helps in the recruitment of highly qualified physicians and nurses, she said.

“We all enjoy learning new procedures and offering new things to the community, making the recovery process for our patients shorter” she said.

Bridgeman also is pleased that Fuller chose to return to his roots.

“It’s very rare that we have students from the Ada area who go off to medical school and return to practice here,” she said. “I think it’s awesome when they do return to serve the community they know and love.”